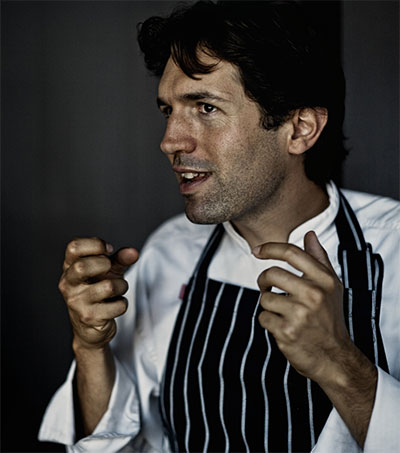 New Zealand-born Ben Shewry’s Melbourne restaurant Attica is admired all over the world over – but success did not make him happy, and he nearly walked away from the kitchen. Until he was saved by a fisherman, his love for basketball and his family. The Guardian’s Allan Jenkins reports.

Shewry is widely regarded as the best cook on his continent but half-hidden behind his success running one of the world’s top 50 restaurants, the public face of modern Australian cooking, is another quieter, darker story of depression and despair.

“I was really close to not cooking any more,” he says. “I couldn’t get out of bed. I didn’t admit it. I hid it. I didn’t want to burden my wife.

“I was feeling sorry for myself, helpless. Then I met Lance Wiffin.”

Wiffin is an unlikely saviour. A quietly charismatic fisherman, he owns the Sea Bounty mussel farm close to the Shewry family home, an hour’s drive outside Melbourne.

Wiffin tells Jenkins how fishing here had almost failed when he was a young man. The wild mussels stopped spawning, the scallop market disappeared. He almost gave up but he had a family to feed. “I nearly walked away from the sea,” he says, “but I knew I belonged on a boat.”

“I was in awe of his openness and honesty,” Shewry says later. “His industry was facing extinction. He worked all the time, he missed his kids. It struck a chord with me. I realised I had to make changes, to repair my relationships, to make time for my family.”

Shewry is special. You will not find this food, these flavours, anywhere else than in his brilliant jewel box of a restaurant in the Melbourne suburb of Ripponlea where Shewry, his happy staff and ingredients happen to be. The mussel dish is just that: Lance Wiffin’s delicious blue mussel, perfectly cooked, presented on a seaweed “net” – deceptively simple food with a personal story you feel only Shewry could have created. The meal like the man is welcoming. “Life is not about legacy,” he says. “It’s about being kind to other people.”