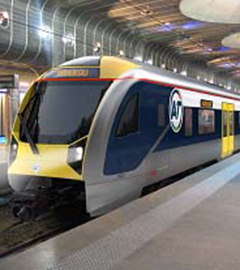 Monocle radars Auckland as a “City to Watch” on the international stage in 2014, primarily stimulated by the forthcoming launch of a fleet of 57 electric trains as part of a billion dollar rail infrastructure overhaul.

The Spanish-made CAF electric trains, representing an investment of $420m, are set to replace the old diesel fleet that had previously served Auckland for decades. The new three car trains will offer faster and more frequent service, carry up to 375 passengers, and provide a quieter, more energy efficient system devoid of air pollution. They will carry up to 40% more passengers, a significant capacity improvement for a city predicted to reach a population of two million by 2031. The trains are currently in testing and will commence service on the Onehunga line at the end of April.

The Auckland rail infrastructure project includes double tracking and electrification of the rail network, new stations and redevelopment of centres such as New Lynn. A $2.4b rail tunnel under the city is also in the works.

Auckland Transport CEO David Warburton comments, “The benefits will be economic, experiential and environmental, including improved travel times, increased frequency, cost savings, efficiency improvements, and the environmental benefits of retiring the diesel fleet and fewer cars on the road.”

Monocle references a “massive urban renewal project” underway in downtown Auckland. “Narrow streets are being torn up and replaced with ‘shared spaces’, where cars give way to pedestrians; new precincts like City Works Depot, North Wharf and Britomart are booming.”

Auckland’s civic goal is to be “the world’s most liveable city”. It is ranked #3 by Mercer, #10 by Monocle and #10 by The Economist, and citied as one of the “best places to visit” by Lonely Planet. Auckland currently welcomes 2.8 million people from around the world every year, 70% of the country’s international guests.

Monocle’s “Guide to Better Living” notes that Auckland – “the fastest-growing city in Australasia and home to a vast array of independent entrepreneurial set-ups that are helping give the place a new energy and confidence” – is overcoming its reputation for poor public transport and reliance on public cars by “working furiously to connect the dots with an ambitious infrastructure programme and greater densification around town centres.

“But it is this very sprawl that has created a city fill of charming individual urban villages. That’s where you’ll find craft brewers such as Hallertau down the road from black-sand surf beaches, local cafes such as Kokako and farmers’ markets such as La Cigale, packed with artisan producers and organic produce…Auckland is finding its groove after years of looking enviously across the Tasman…it’s a lifestyle to make anyone jealous.”