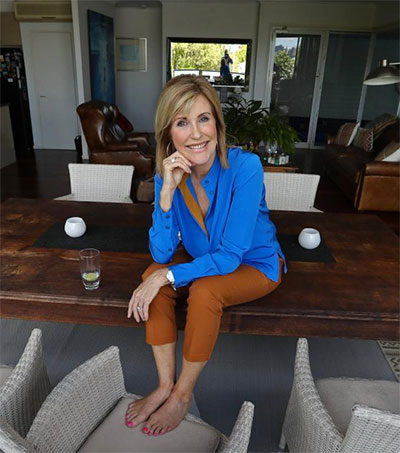 At Home with Newsreader Kay McGrath

For a woman who has appeared in living rooms across Queensland almost nightly for 30 years, Channel Seven newsreader New Zealand-born Kay McGrath is a little uncomfortable in her own.

“I wish I hadn’t put that big monitor up on the wall,” McGrath says about the large television screen in her airy, light-filled, inner-Brisbane home.

Not that she has any misgivings about the television career she’s enjoyed for the past 39 years, including almost 30 as a presenter.

The journalist fondly remembers the days when there was “only free-to-air television” and money was not so tight.

“I’m grateful that I am still in the industry,” says McGrath, who now presents the ratings-winning weekend news for Seven. “I’m not as deeply immersed as I was because I’m not there five days a week, but at my age and stage, it’s still interesting to be inside the tent and observe from the inside this [digital] revolution, which is quite extraordinary and moving at breakneck speed.”

At home, McGrath is less likely to be found anywhere near the television – nominating the deck as her favourite space, with its sturdy 10-seater dining table and magnificent city views.

“I love the air flow here and this table is probably the engine room,” she says.