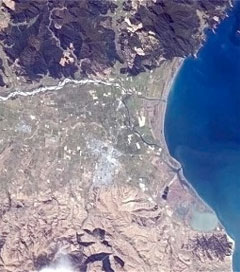 15 February 2014 – The vineyards of Marlborough are the part of the world which most caught Canadian Chris Hadfield’s eye from space. The “selfie”-taking astronaut, who became widely known after performing a rendition of the David Bowie song Space Oddity at zero gravity, told the BBC how taken he was with the area after seeing it from more than 200 miles above the planet.

“It’s a very photogenic part of the world you’re from,” Hadfield told his interviewer, New Zealander Lucy Hockings, confirming that it was the place he most wanted to visit.

He tweeted an image of the country in April last year while commander of the International Space Station (ISS), with the caption “Blenheim, New Zealand, in the lovely centre of wine country.”

New Zealand, he said, also formed a milestone while watching the world in orbit.

“After you cross New Zealand, you have the long passage across the Pacific, so it’s your real last sight of land for – gosh, it takes a half hour almost to cross the Pacific.”