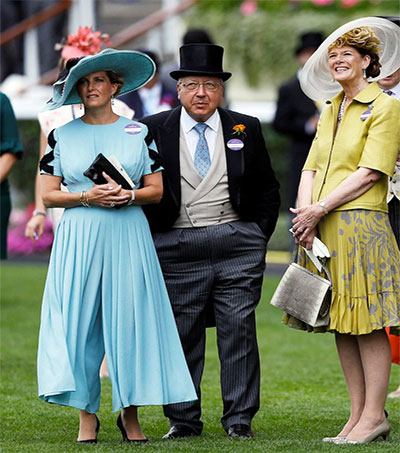 Admittedly, it was perhaps the most unjumpsuit-y of jumpsuits, with its flowing culotte trousers making it easily mistaken for a dress. Nevertheless, in style terms, this is a revolutionary move on the countess’s part.

Although the jumpsuit has become a modern fashion go-to, the style was only approved by the Royal Ascot committee as a passable item to wear in the Royal Enclosure last year, so we might have expected it to take a little longer for the royal family to trial the look.

“We spoke to people in the fashion industry to take a sense of whether we should be considering it,” Juliet Slot, Ascot’s commercial director told The Telegraph at the time. “As a result of that, I took it to the board and got their approval. We are very considered about everything we do. Our customers and our members, particularly in the Royal Enclosure, have high expectations of what formal attire is. The board all felt, based on the evidence that I shared with them, that this was the right decision.”

The countess’s jumpsuit is the £1,992 ‘Vida’ style from Wickstead’s spring/summer 2018 collection. This was Sophie’s second look by the designer in as many days after she wore a blush pink dress with black rik-rak details for the first day of racing.