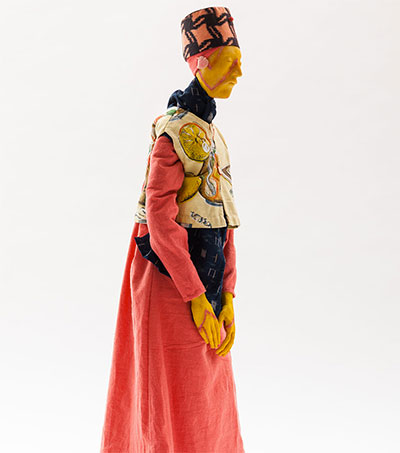 A festive crowd of art-lovers gathered at Lux Art Institute in Encinitas, California recently for the opening of a show by the first of its 2018 resident artists, London-based New Zealander Francis Upritchard.

Upritchard’s odd and interesting mixed-media sculptures have won her an international reputation, and she not only represented New Zealand in the 2009 Venice Biennale, but was invited back in 2017 to be part of the Biennale’s curated exhibition, “Viva Arte Viva”.

Although most of the pieces on view were made of polymer plastic, Upritchard is best known for her work with balata, a type of Brazilian rubber formerly used for gaskets and the covers of golf balls. It’s not an easy material to work with, and there are few artists who use it. In fact, she has a special “balata dealer” in Brazil, whom she met there 15 years ago.

“I’m the only non-indigenous person he sells to,” Upritchard said. “There are only about five Brazilian artists that work with balata, which was originally used to make vessels for carrying water. In the 1960s and ‘70s, when synthetic rubber came in and balata was no longer big business, they started making small figures out of it – animals like goats, sheep, water buffalo and parrots.”

The process of extracting balata from the trees is laborious, and highly controlled. “It can only be done during the three months of the rainy season,” she said. “Six men set up a path to the trees, and each tree can only be used once in eight years.”

That’s not the only issue with balata. It’s expensive (US$100 a kilogram) and tricky to handle, since it has to be softened in hot water and then submerged in a cold bath and quickly shaped underwater before it turns hard again. It’s ephemeral, too, so the sculptures don’t last very long. “And it smells weird,” she added. “Like compost. But it’s fun to work with.”

Upritchard’s exhibition is on at Lux until 23 March.

Since 2016, she has had a survey exhibition of her work from the past 20 years called Jealous Saboteurs, which started at the Monash University Museum of Art and has shown at different location all over New Zealand.