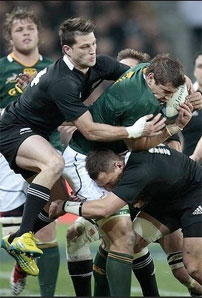 Examining the All Blacks 21-11 win against his national team, the Springboks, Brumbies coach Jake White writes in The Citizen’s sports column: “The opportunity to secure ourselves against defeat lies in our own hands, but the opportunity of defeating the enemy is provided by the enemy himself. There are any number of variations in the translation of that thought since Chinese military strategist Sun Tzu wrote The Art of War in the 6th Century BC. For me, what Sun Tzu wrote all those centuries ago is relevant to any confrontation and all boils down to one basic thing: If you react to what is perceived as your own weakness, it gives credence and confidence to your opposition. The All Blacks may well be without an injured Dan Carter and Sonny Bill Williams leaving to play in Japan – but New Zealand are not reacting.” The All Blacks next play the Pumas in Argentina on 30 September.