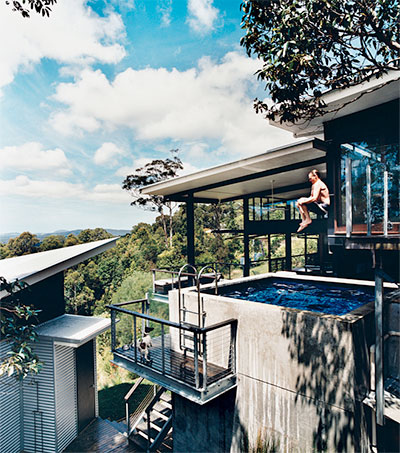 New Zealand-born painter Stefan Dunlop’s treetop Noosa home is one of a number of artists’ houses throughout the world with “significant spatial drama”, according to a Telegraph article. Dunlop is an individual “with an aesthetic sensibility … affect[ing] [his] living environment in a positive way.”

“Dunlop was living in a London loft when he found a plot of land occupying a privileged perch at Noosa, northeastern Australia. Handily, his new next-door neighbours turned out to be members of the architecture practice Bark Design, and together they devised a home that sucks in the extraordinary Pacific views and Antipodean light. The main house is sheathed in batten screens of spotted gum wood, and Dunlop also has a detached studio clad in corrugated tin.”

In 2007, Vogue Living featured the Dunlop home. “The house is perched on a steep south-eastern-facing slope. Plenty of height in the undercroft allows for Dunlop’s large paintings to be brought out of the skillion-roofed studio that abuts the home’s verandah.

“The house celebrates its tough environment and creates a striking shell for the furniture and artwork within, while the separate studio acts as a hideaway where Dunlop can, in his own words, ‘go for the jugular’.”