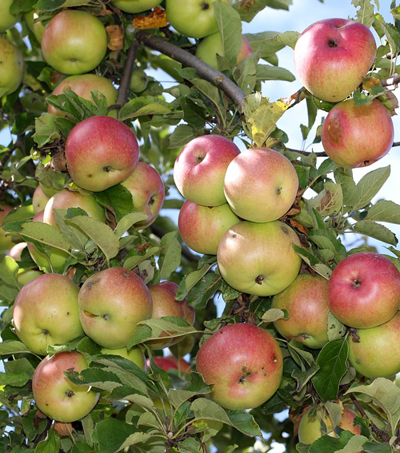 Your Apples May Soon Be Picked By Laser-Shooting Robots

Roboticists are creating crop-specific machines to harvest fruits and veggies. One of these inventions is “the apple-picking robot, a metallic farmer that just graduated from R&D and won a job in a New Zealand orchard. Its deployment may be limited at the moment, sure, but it’s a glimpse at a future in which hyper-specialized robots help feed our growing species.” Matt Simon reports for WIRED.

“The robot, developed by a company called Abundant Robotics, navigates the rows between apple trees using lidar, which paints the world with lasers, and images the fruits with machine vision.”

“If it’s ripe, then the computer system sequences it for the robotic arm to pick.”

“Maybe not so much as pick but slurp—the arm uses a vacuum tube to suck the delicate fruit off the plant. The apple then hits a conveyor, which ferries it into a bin. The robot can do this 24 hours a day, scooting up and down the rows of the orchard, skipping not-quite-ripe fruits to return to later, as a human picker would,” writes Simon.\
There are many logical and technical reasons an apple-picking robot hasn’t existed until now.”

“What’s now made automation possible for apples comes down largely to the sensing—this robot not only pinpoints the fruits, but determines ripeness too. Its operators can adapt it for a particular variety of apple by consulting with the farmer, who knows from experience what color equals ripe. Abundant Robotics can then tweak the vision system accordingly.”