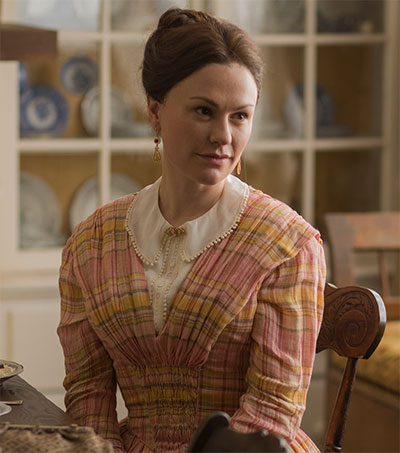 Alias Grace, Netflix’s limited series from writer/producer Sarah Polley and director Mary Harron based on Margaret Atwood’s novel, dives deep into the life of the convicted murderer, but whether or not she was truly guilty is far from the point of her story. New Zealander Anna Paquin, 35, plays housekeeper, Nancy Montgomery.

“It’s not a simplistic notion of good and bad and heroine and villain. You will puzzle over it because when you think about the guilt or innocence, you will also think about the world they came from and what makes people do things and what turns women against each other, which is one of the key themes,” Harron tells Variety. “Honestly I think everyone will create their own Alias Grace in their minds, and that’s the great thing about ambiguity. You are filling in the blanks.”

Atwood’s novel, which fictionalised true events, was the source material for the series, but it also served as inspiration and a reminder of why it’s so important to rewrite ideas of women that came from a “very patriarchal perspective” and allow them to be fully and freely complex characters.

“There’s loads of bad scripts and loads of uninteresting female roles, so a story that is centred around complex, morally ambiguous, non-clearly delineated good gals and bad gals is very exciting because I think a lot of times male characters get to be the hero but also get to be morally ambiguous in a way female characters need to be punished if she does the wrong thing,” Paquin says. “What’s so delicious about Grace is she’s kind of like [raises her middle fingers] to the whole notion because maybe she did it and maybe she didn’t. She got punished but also she got set free. It’s a beautiful sort of mindf— as far as the conventions of female protagonists.”

Paquin was raised in Wellington. She has starred in films including The Piano, X-Men and Margaret, as well as playing the lead role of Sookie Stackhouse in award-winning television series True Blood.