NZEDGE  >  News  >  Arts  >  Amounting to a Kind of Debonair Psychedelia 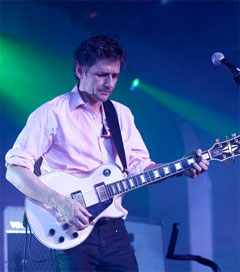 Amounting to a Kind of Debonair Psychedelia

“He doesn’t have the same grit or growl, but his songs – for the beloved bands Luna and Galaxie 500, as well as solo – align with the gentler odes of the Velvet Underground and many of Reed’s later classics as a balladeer. For his new ep Emancipated Hearts, Wareham revisits the sound he has favored and refined for decades, with searching words (sample song title: ‘Love Is Colder Than Death’) and an urbane sound that amounts to a kind of debonair psychedelia.”

Wareham tours Europe through December. He plays the Point Ephémère in Paris on 7 December.

Wareham, 50, was born in Wellingon. His memoir, titled Black Postcards, was published in 2008. Wareham lives in New York.