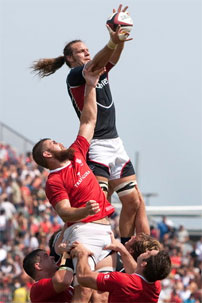 “With the zest notable to rugby players on and off the field, the Americans are delighted to be heading to the home of the All Blacks, with their Maori in-your-face war dance, the Haka,” New York Times reporter George Vecsey writes. “The All Blacks are the favourites again. ‘You’re going in there as an underdog, but it’s still exciting,’ said Todd Clever, captain of American team the Eagles, who played in the World Cup in 23 in Australia. ‘You’re listening to your national anthem and playing opponents who are true professionals,’ Clever said. ‘It’s hard to compete with those countries.’ This year, for the first time, Universal Sports and its partner NBC Sports will show all four American matches on a tape delay bucking the N.F.L. on a Sunday. The six-week exposure will help Americans discover a sport that combines the manual dexterity of basketball with the jarring physicality of football and the full-field creativity of soccer.”