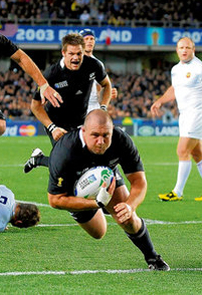 “New Zealand is always the team to beat. You talk about rugby, you talk about the All Blacks,” says actor Mickey Rourke in The New York Observer. Rourke and writer Jenna Sauers watched the World Cup final in a crowded Greenwich Village bar alongside countless other All Blacks supporters and a handful of French fans. “The All Blacks are indisputably the world’ best rugby team. They are both the most winningest and the highest-scoring team in the sport’s history; they’ve won 75 percent of their games since 1903,” Sauers writes. “But in World Cup competition, the All Blacks have a habit of losing to inferior teams. Tensions at the lock-in were therefore high. By 5.45, the lowest-scoring, and closest, World Cup final ever was over, and New Zealand had won. The bleary fans, more relieved than exuberant, shuffled out into the breaking day.”