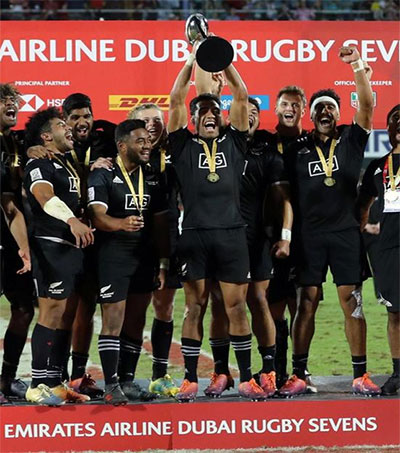 Clark Laidlaw, the All Blacks Sevens coach, said the team’s success at the Emirates Airlines Dubai Rugby Sevens was an achievement that ranks alongside winning the World Cup and Commonwealth Games last season. The team clinched the Emirates International Trophy beating the United States 21-5.

Given that New Zealand won the World Cup Sevens in July, many would have had them down as strong favourites for the final, against an American side who were making their debut in a Dubai final.

That, though, would discount the fact New Zealand’s squad was heavily denuded by injury and unavailability.

They lost four players over the course of the weekend, leaving them with just nine fit players in the squad to face a US team that counted in its ranks Perry Baker, the two-time world sevens player of the year.

They showed remarkable resilience to claim the title, with tries for Tone Ng Shiu, Dylan Collier and Ngarohi McGarvey Black in the final.

“It is right up there with the World Cup and Commonwealth Games last year,” Laidlaw, the Scottish coach of New Zealand, said.

“It is a cliché, but we spend a lot of times on our culture and what it means to play for this team. If we get that right, the leaders show the way and the younger players follow in behind,” he said.