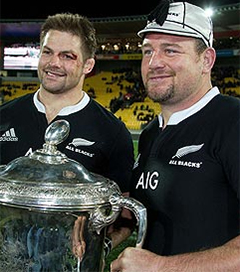 The All Blacks have retained the Bledisloe Cup after 27-16 trouncing of the Wallabies in their Rugby Championship clash in Wellington on Saturday night.

New Zealand winger Ben Smith followed up on last weekend’s hat-trick of tries against the Wallabies in Sydney with two more, while debut fly-half Tom Taylor confidently kicked his way to 14 points before being taken off injured late in the game. Israel Dagg scored the final points of the match as he successfully converted a penalty.

“For the first 30 minutes, we were under the pump,” said captain Richie McCaw. “But when we got our opportunities… we managed to capitalise on it and that’s the way you’ve got to do it in rugby these days. I thought we took good options, our kicking was good and we took our chances.”

The match marked loose-head prop Tony Woodcock’s 100th test for the All Blacks, making him the fourth player in history to reach the milestone. Described as one of the game’s quiet achievers, Woodcock is renowned for his durability and consistently high standard of play.