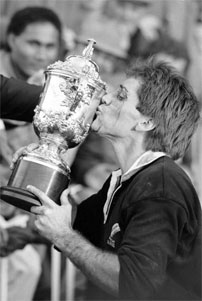 All Blacks May Win Again

Graham Henry’s team will end their series of Rugby World Cup chokes when they host the global tournament for the first time since 1987 believes former Springboks coach Jake White, the man who won the last Cup in 27. White, who has just agreed to a four-year deal to coach the ACT Brumbies from 212, said he had no doubts the more attack-minded New Zealanders could prevail at this year’s tournament. “The laws are definitely going to suit the All Blacks and the way they play,” White said. “One of the things they’ve got, and has always been a bonus, is that everybody in New Zealand plays the same style of rugby. I’ve got no doubt the All Blacks are favourites. They’ve got a wonderful group of players, they’ve got a coaching staff that stayed on, they’ve got a settled squad unlike the rotation policy they had in ‘7, and they’ve got some wonderful players coming through.” The Rugby World Cup runs from 9 September through 23 October. New Zealand play in Pool A alongside Canada, France, Japan and Tonga.