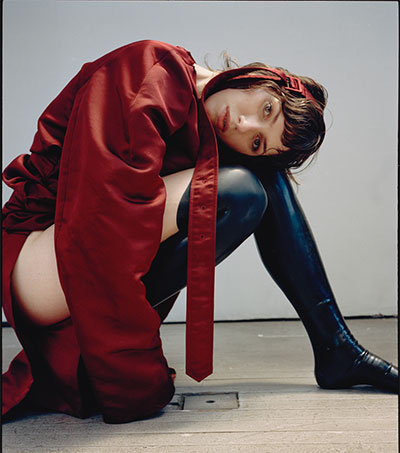 “I called singer-songwriter Aldous Harding in the early evening hours from a computer telephone in the projection booth of a theatre in New York City. She picked up a hemisphere away in New Zealand while relaxing on a beach, taking a moment off before heading back out on the road for the remainder of the year,” Jason Grisell writes for American fashion and culture magazine, Office.

“Before we spoke, I’d heard Harding described as a ghostly rural-gothic folk singer, conjuring in my mind the landscapes of Jane Campion’s The Piano and her TV series Top Of The Lake. An extraordinary artist and gifted singer, Harding spoke to me about her newest record Party (Flying Nun/4AD), her creative process, and her plans for the future.”

Harding, 27, explains to the publication that where she is from doesn’t have a lot to do with her songs or why she writes them.

“But maybe a feeling of being isolated, coming from a town and growing up in the country for a lot of it [does], I was kind of at the mercy of that. There’s no record store in Geraldine, and the times when I was interested in that kind of stuff, I didn’t have any money. I didn’t have a laptop. I guess I was isolated, I don’t know,” she explains.

“The more I play music, the more inspired I get to make new music. I just find that easy at the moment. It’s like the new songs almost work like preserves. So I know that if I do burn out for a time, I have this stuff prepared for when I’m ready.”

Harding has just completed her US tour and now heads to Europe where she plays in Oslo, Norway on 20 October before a concert in Stockholm, Sweden on 22 October.