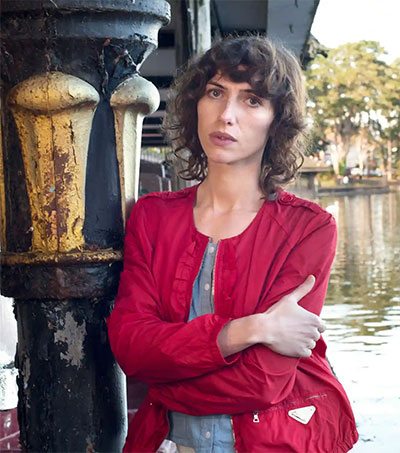 New Zealand musician Aldous Harding is popular: she’s sold out shows for her tour and headlines London’s Roundhouse next month. Young women who present themselves as she does, daring you to turn away, are rare these days, Jude Rogers reports for British newspaper, The Observer.

We discuss music that’s made her feel things. Meat Loaf, she says: “I love how the poetry and the strength of his voice made up for how ridiculous it was.” Neil Young: “If I’m feeling confused, I always listen to him, and go, ‘That’s how things should sound. In the sense that it’s music that leaves me hopelessly baffled by his intentions, his secrets.” She was also a huge fan of Lisa “Left Eye” Lopes from TLC. “She was so weird, so strange and so cute, but she was not vulnerable. I also realised I dance the way I do because of her: the arms up, the hips forward.” She shows me, jutting out her chin.

Her recent album, Designer, also has a foot twisting gently in the realm of pop, although its catchy songs still have wrigglier, murkier lyrical roots. Take the sweet guitar-pop of The Barrel, full of puzzling phrases such as “show the ferret to the egg” and more emotional ones, such as “when you have a child, so begins the braiding/ And in that braid you stay”. Her ever-changing voice also leads the mood of the songs: gently heavenly on Weight of the Planets, sadly stern on Heaven Is Empty. On the title track, Harding sings the lyric “give up your beauty” with relish.

She has never tried to make art that’s arresting, she says. “All I ever wanted to do was to do something interesting.” But she will admit that she’s “trying to work out what’s missing in music. I’m trying to hold your focus as an unremarkable person trying to do something remarkable.”

And she’s doing this while there’s an aversion in her generation to admitting that you’re even trying, she says. Why does she think this? “Because there is so much to lose. It’s like when people go to acting school and someone will say, ‘Now, I want you to scream at the top of your lungs’ and they don’t want to. They don’t want to watch themselves fail.” Fail at what? Harding’s look lingers in my head long after I leave. “Fail at what is basically being human.”

Harding, who is based in Cardiff, Wales, tours the UK and Ireland from 29 November.