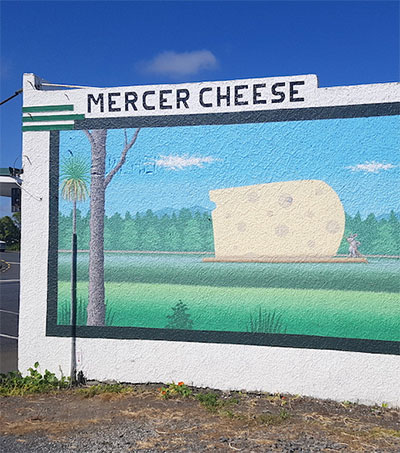 Since 1981, a pioneering Dutch immigrant has been developing a distinctive New Zealand style of cheese, and now the world is starting to sit up and take notice. But for Albert Alferink, he’s just doing what he’s good at: working. Alice Neville reports for The Spinoff.

Put Fonterra and Big Dairy out of your mind for a minute. Instead, meet a 67-year-old Dutchman named Albert, who for 37 years has been turning small amounts of Waikato milk into world-class cheese. From the humble factory he built himself at his home in Onewhero, south of Tuakau, Alferink makes Dutch-style cheese with milk from the cows at the neighbouring farm. He and his wife Ineke sell that cheese at their shop in Mercer, which gives the business its name, Mercer Cheese.

New Zealand gouda is quite different to its Dutch counterpart. Some even dare say better. It all comes down to that wonderful milk, which in turn comes down to the cows and all that lovely grass they eat. (In the Netherlands, cows spend much of their time in barns rather than on pasture.)

James Thomas, a former cheesemaker who now sells the stuff through his company New Zealand Cheese, says local gouda is cleaner tasting than the Dutch variety.

“What Albert has done has helped to define what a group of Dutch cheesemakers now produce in New Zealand. This category of gouda-style cheeses are world class and have become internationally unique,” Thomas says.

Alferink was, as far as he knows, the first Dutch cheesemaker in Aotearoa, starting out in 1981.

Since late last year, Thomas has been exporting Alferink’s cheese to Australia, where it’s distributed by a big company that sells $50 million worth of cheese a year.

Now the world, or at least some of it, is discovering how good Alferink’s cheese is. The first shipment of the addictive, caramelly Mercer Vintage Waikato, packed with those amazing crunchy crystals that characterise long-aged hard cheeses, went to Australia in November. In that same month, the cheese was awarded a bronze medal at the World Cheese Awards held in Norway, among a field of 3500 cheeses from around the globe. Two more shipments have since gone to Australia, adding up to more than a tonne in total, and the cheese has been very well received, Thomas says.