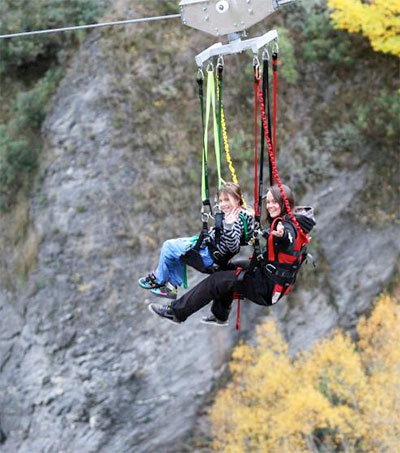 On the Adventure Trail in the Footsteps of William and Kate

On a South Island tour of New Zealand in the footsteps of royal couple William and Kate, the Daily Mail’s Katie Nicholl begins in the “quintessentially English city” Christchurch before making her way further south deep into thrill-seeking country.

“An hour’s flight to the west of the island, it is the country’s adventure capital and the landing [in Queenstown] is considered one of the top ten in the world,” Nicholl writes.

“Keen for a bird’s-eye view of the region, I took the Skyline Gondola, which transports you almost 1500ft above Queenstown and Lake Wakatipu. The views on the way up are amazing, as are the incredibly tall trees.

“Having watched numerous bungee-jumpers launching themselves off platforms during the ascent, I headed to the AJ Hackett Bungy, where the thrilling jump was pioneered.

“I suffer from vertigo so chose the Kawarau Zipride over the more hair-raising bungy.

“The ‘zip’ cable ride, which costs £25, starts about 130ft above a river and sends you gliding almost 400ft across a stunning canyon with some spectacular views.”