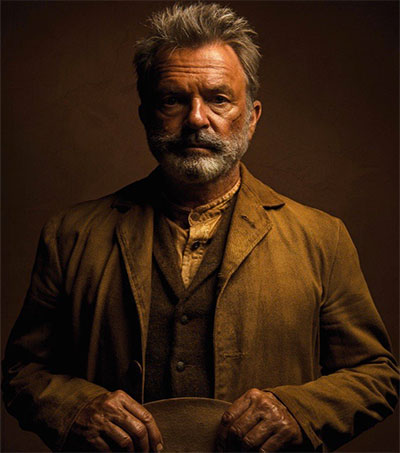 Sam Neill’s acting career has broken the 80-film barrier. In his most recent film, Sweet Country, the New Zealander plays a missionary making a new life for himself on the Australian frontier in the 1920s, until he’s drawn into the search for an Aboriginal stockman, who against a backdrop of simmering racial tension becomes implicated in the death of a white farmer.

On the morning of Sweet Country’s world premiere at the Venice Film Festival, the Telegraph’s film critic Robbie Collin sat down with Neill in a quiet courtyard of the city’s Excelsior Hotel to discuss the film, and how he found its provocative story striking all kinds of chords with his own life and beliefs.

From there, it was only a short conversational stroll to some other deeply serious topics, including wine, comedy, his disastrous James Bond audition, and Jurassic Park.

“Australian history did not begin in 1770. It’s widely accepted that Aboriginal people have been there for 80,000 years, and there’s a chap currently working on a theory that it may have been 125,000 years,” Neill says. “So we are talking about a presence there 123,000 years before Christ. And theirs is a fascinating culture, one that treads lightly on its environment, that cares for its country and its community, and that saw no reason to build great monuments or buildings because they lived in harmony with their surroundings. And this film deals with a very violent episode in which all of these things are impacted.”

“I ran into Clint Eastwood a few years ago, and we were chatting away, and I said, ‘Clint, you know, I’ve made a lot of films but never a western, and it’s a bit of an unrealised ambition.’ And he demystified it totally. He said, ‘You just wear a big hat and squint a bit.’”