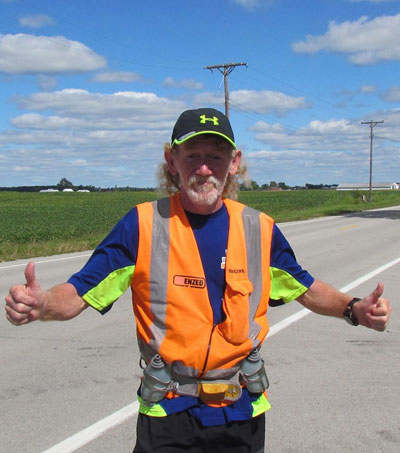 “64-year-old Perry Newburn just ran the length of his native New Zealand” fuelled by hash browns and milkshakes,” Jane McGuire writes in an article for Runner’s World. With his run Newburn was raising money for an autism charity in New Zealand.

“When planning his 1,300 mile route, Newburn scheduled stops at McDonald’s to refuel along the way.”

“Unlike others taking on such an adventure, he ditched the fancy GPS watches, opting instead to run at his own pace for a route he’d plotted on a 20-year-old map. His support crew consisted of his friend Graeme, who drove ahead in his Toyota Corolla,” writes McGuire.

“Newburn averaged around three full marathons each day, getting up at 4am in order to fit all the miles in, and various people came out to join him on his epic challenge.”

When speaking about reaching the finish line of his 1300 mile challenge, Newburn added: “I almost collapsed in a blubbering mess,” he said.

“I was just so elated. And happy I didn’t have to get up the next morning at silly o’clock.”