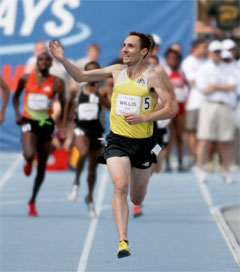 Lower Hutt-born middle-distance Olympic medallist Nick Willis, 30, is venturing into the hybrid sport of speed golf and will participate in the Speedgolf World Championships on 26 October and 27 October at the Bandon Dunes Golf Course on the coast of Oregon.

According to two-time Olympic medallist runner Kenyan Bernard Lagat, who is participating with Willis in Oregon, speed golf is “golf played very quickly … Scores are calculated by adding the time taken to complete the round and the total strokes taken.” Speedgolf is almost continuous motion; it’s akin to polo, without the horses.

Michigan-based Willis told Runner’s World that he learned about the game from a Wikipedia page. “In my lone attempt at the game following the 2008 Olympics, I shot a 79 at my home course in New Zealand – Shandon Golf Club –  and completed the round in 43 minutes,” Willis said.

“Oxygen debt is a bit of an issue, so you have to run slightly within yourself,” he said. “The key is to be comfortable not taking long to set up your shot and swing.”

Willis hopes his running prowess will give him a 5- to 8-minute advantage over many of the top speedgolf entrants.