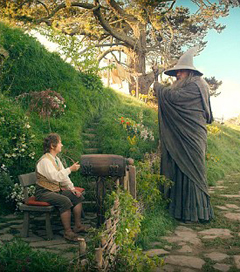 The Daily Mail’s ‘Awe Inspiring Journey’ to Hobbiton and Beyond

‘Thanks to the Lord of the Rings, and now The Hobbit, New Zealand [is] one big photo opportunity for Tolkien fans’, says Helen Nicholson in The Daily Mail. Nicholson did a Hobbit Tour of New Zealand. First stop was Hobbiton, the Waikato site of The Shire in Lord of the Rings. According to Nicholson, when director Peter Jackson asked the owners of the farm on which The Shire was built if he could rebuild Hobbiton for The Hobbit, the answer was yes; as long as he made it permanent, ‘The results are stunning. Dozens of characterful little hobbit holes have been built into the hills across the site using real bricks and timber, complete with thriving gardens and little pathways that lead down to the lake and the village’s famous inn, The Green Dragon.’ Nicholson feared before reaching the site that it might be ‘chaotic and unashamedly commercialized,’ Instead, she found ‘blissful calm, punctuated only by the sound of the water mill’s wheel and people chatting by the entrance to the village pub’. The sites owners, Ian and Russell Alexander, took her on the Hobbiton tour. This includes a visit to Bag End, a wander through the Hobbit’s wild flower gardens and a drink in the Dragon. Next was Wellington. Here, Nicolson viewed where the hobbits hid from the Black Rider, the setting for Rivendell, and the site of the battle of Helm’s Deep. She then visited ‘the famous Weta Workshop’. Nicholson then joined Jared Connor, Location Manager for The Hobbit, on a ‘whistle-stop’ tour of the film’s South Island sites. She flew over land close to Lake Pukahi recalling how, ‘with its backdrop of vivid turquoise lakes and imposing mountains furrowed by vast glaciers, some viewers found it hard to believe that the landscape wasn’t created by Jackson’s [digital] wizards.’ Nicholson visited Queenstown, the backdrop for the dwarves journey to the Misty Mountains. “The greatest sight on earth’ Nicholson recalls Stephen Fry, a star in the next Hobbit film, describing the views of Queenstown and the Remarkables mountain range. She concludes her own epic journey in Fiordland National Park, ‘where the scenery generates a sharp intake of breath’. The Park was where the huge eagles rescued the hobbits from the orcs. Nicholson repeats Hobbit star Martin Freedman’s comment on seeing Fiordland. The backdrop is so beautiful people will think its [digital] – it looks too prefect, ‘ Freedman remarked. Freedman joked that Tourism New Zealand could use his quote as an advert for the country. ‘But Peter Jackson has already done that job for them,’ Nicholson concludes.