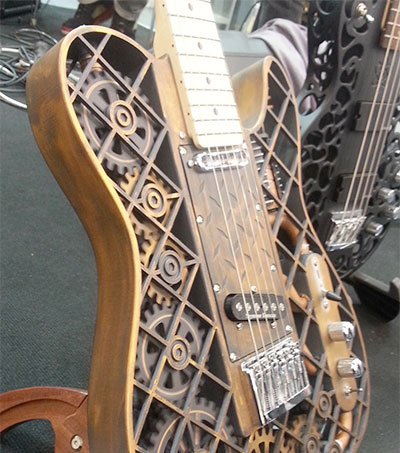 This is music to the ears of instrumentalists and fans of 3D printing alike. New Zealander Professor Olaf Diegel, who teaches product development at Lund University in Sweden, along with a band of students has taken two guitars, a drum set and a keyboard from a concept to the concert hall.

The idea came to Diegel some years ago as a rock band-playing youth who had started experimenting with 3D printing. “Well, at that time I was just prototyping but I had seen it evolve and getting better and better over the years until the point where it was being used for the manufacture of lots of applications,” Diegel explains to Metro.

The electric guitar was the first instrument to be completed and worked perfectly after just 11 hours of printing. “Then I tried making a bass guitar, which is more difficult as the strings cause much more tension and take more time, but that worked fine too,” he says. To complete the band, the designer also produced a drum kit and a keyboard after a partnership with 3D Systems, the world’s leading manufacturer of 3D printing machines.

Diegel is now working on a second version of a 3D-printed saxophone and is considering making a one-of-a-kind wind instrument, like a flute on which it is possible to play complete chords, together with the melody. “3D printing allows us to make products that would be impossible to make using conventional technologies. If I were making conventionally-shaped guitars then there would be better, more cost-effective ways of making them. But because the shapes of my guitars are incredibly complex, it’s the ideal technology to use,” he says.