Stepping Back from the Precipice

It’s been grim-times at home in Taradale, and that’s more than the recession or a bit of shitty weather. Last weekend, the first in May, a local bloke, Michael Meehan, was shot dead at the river, down the back of the pa. He was duckshooting with family. A day’s recreational excursion to Waiohiki turned to tragedy and he never returned home alive. His family is shattered and the love of a good dad is now just a memory for his boys. That piece of land on which Mike Meehan died was well known to Senior Constable Len Snee, our local Taradale copper.

Len foraged around it many times, sometimes simply on a run for relaxation and fitness, other times as part of operational duties, surveillance and intelligence gathering. He was old school in that way, thinking nothing of parking up in trees near a backyard and seeing things for himself. Len pissed off many of the local bad boys because he was so good at his job; “pissed off” I might say, kindly, in the same way that one gets pissed off at a good player who sidesteps you to score, or out-scrummages you. It’s a grudging-respect-pissed-off. I liked Len. In some senses and at certain times over the past years that I’ve known him, unlike when he was making a visit to the generally well-heeled suburbs of Hospital Hill, Len might have had cause to be unsure about what he might encounter when he visited Waiohiki. At times if he came armed it would not have been without reason. But in recent years perhaps the circumstances have changed; people have mellowed, behaviours improved. These days, if he needed to, Len would simply pop around to my home, on his own, and have a chat. Sometimes it was a warning, advice for me to share with those who had ears to hear; sometimes a request for help in a troublesome situation; sometimes an explanation. There was no breaking of confidences, no soft deals or anything – if the law had been broken and proven so, Len Snee would not hesitate to prosecute – but, pragmatically, if justice could be served by a collegial community-based response and followed by the required behaviour change, then he would enable that to happen. I call it Kiwi-policing; it’s an indigenous approach…you might call it Maori policing….and take that in any way you like. On Thursday morning I was back up home from Wellington for a meeting. There’d been a car crash on the Napier Hastings expressway. It was blocked off for a while, and some members of our group were delayed. There was much wailing of sirens and we thought nothing much of it. We were well into the swing of things when the urgent phone went off. It was a Wellington official. A policeman had been shot and killed in Napier. Some reports had it being near a gang headquarters. Did I know what was up? I was stunned when I eventually heard that it was Len Snee who was dead. All I could think of was how he would have simply gone out to work that day and, in what should have been unexceptional circumstances, expected to come home to his family. Like Michael Meehan down at the river it wasn’t part of Len’s plan to come home dead at the hands of an angry gun-lover called Jan Molenaar. I went down to the florist in Taradale and asked her to make up a wreath. I didn’t really know what to say to the detective who took it from me, so we just nodded, and that was probably enough. ‘Firm but fair doing your job’ I had written on the card. Moe mai koe te tuakana e Len. Haere ki te maunga Ruahine. Haere, haere ki to matua tipuna a Hehu. Haere atu ra e te rangatira, te toa, haere atu ra.

In the wake of Len’s death there will be widespread calls for extending the armament of police officers and a general harden up all round. These are times of risky shift, potentially what Gladwell calls ‘tipping points’. ‘Systems thinking’ reminds us of the need to take into account the consequences of major shifts in polices and in the ‘how we do things’. Kia Tupato. Be careful. I heard the Mayor of Whanganui on TV saying that any policeman going into South Auckland should be automatically armed. Apparently he believes there is to a socio-geographic rationale in this. Police dem niggers. Dey bad, we good. It’s cold comfort to me that this sad event happened not in Maraenui or Flaxmere or some low decile brown suburb but in a ‘good’ affluent area, or that the first time in my knowledge in New Zealand that an armoured military vehicle has been used to support policing was not to combat a Maori gang but someone who reportedly hated gangs. Following the passing of legislation in Parliament it is now possible to ban gang patches in Whanganui. According to the Mayor this ability to suspend the Bill of Rights Act “changes the fabric of society”. True that. Well, I suppose it will help make things more transparent. Having done away with gang labeling the City powers can simply cut to the chase and, as Jimmy Baxter so succinctly put it, charge people with “the crime of being a Maori”.

The Bill itself passed by the slimmest majority – 3 votes – in itself a testimony to the venal ness of contemporary New Zealand politics. How absurd that the Act Party – a supposedly libertarian party – split its vote with three members turning against their intellectual principles and enabling the legislation to pass. Of course their flip flop is the obverse of the Labour Party who even more erratically voted against the legislation, but really agree with it to the hilt. Last year Phil Goff would ecstatically announce to the House that his Government had increased the prison population – a majority of who are Maori – by over 70%. Phil’s enduring legacy may well be that his personal attitudes towards crime and offenders have influenced policy in the criminal justice sector to the degree that he has managed to lock up more Maori than any previous Minister in the history of Aotearoa. It became a mantra of the Labour Party that if you can find a suitably high tariff people will eventually obey. But many won’t and don’t. If they think a law or policy unfair they may well say ‘stuff you’ and do what you don’t want them to anyway, even if it is self-defeating behaviour.

I believe we already have too large a portion of the population feeling significantly unfairly treated, much of it as a result of the moral panic around crime, talked up for the past few years by lobby groups such as the Sensible Sentencing Trust. The talkback airwaves will be full of it, so get ready for more of the same. My ongoing concern is that if we simply continue to introduce increasingly suppressive laws without commensurate investment in community-led change then we are likely to create unintended socially destructive consequences. I do not say this to be unfeeling or rude but whilst there is rightly a national outpouring of emotion for Len and his whanau, and all those brave men injured, and even though there is a poignant pulse in the hearts of those of us who know and respect anyone involved, take note of the possibility of Jan Moenaar becoming a counter-hero amongst the alienated. Have concern about his being emulated. Already a neighbourhood friend of his, perhaps in the misguided emotions of the moment, has written ‘Legend’ on his roof as a tribute to Jan. Now is not the time for the language of anger, hate or of blame from any quarter. Now is the time to give space to the grieving, respect to the dead, and prayers for the injured. The community of Napier rallied around each other in a time of local tragedy. We need to think in these supportive terms nationally. We have witnessed the terrible power of military weapons, and seen para-military and military forces in operational mode on our suburban streets. Hundreds had to seek refuge. It’s time for quiet support and reflection. If we feel like we are on a precipice then help each other to move back. 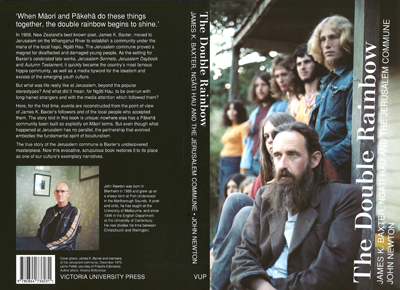 The Double Rainbow – by John Newtown

I appreciate that what you see and how you interpret it depends on your glasses, the framework of your world. A week or two back a group of Black Power went to Unity Books in Wellington for the launch of John Newtown’s book ‘Double Rainbow’. The book treats contemporary history, telling the story of ‘nga mokai’, Jimmy Baxter’s notional tribe and the commune movement that he built at Jerusalem, Hiruharama, on the Whanganui River, not long before his death in 1972. Woven into the latter part of the story are the Black Power, essentially the Wellington chapter, with Gabe Taiwhiti, Bill Maung and me making the occasional appearance. The book records a national waananga that the Black Power held at Hiruharama (Whanganui) in 1989 and the haka ‘Te Rongo Toa’ – the “Warrior Wind” – that arose from the hui. We were gathering to perform it as a tribute to the author. Because the boys didn’t know where Unity Books was we agreed to meet outside the Wellington Library as an easy to find spot. However such is the state of national anxiety about gang members that a couple of policemen turned up to check out what was happening and started aggressive questioning. Despite the fact we were adjacent to Wellington Central, where help abounded if required, one policeman came armed, ostentatiously wearing his Glock pistol – his ‘dick on his hip’ as it was expressed to me. I explained that we were gathered for a cultural event, a book launch. It must have sounded disingenuous. The Police followed us down Willis St wanting to take statements and the like. They had the wrong glasses on for the moment and it seemed they were overreacting. On the other hand three Napier cops, Len Snee, Bruce Miller and Grant Driver had their ‘not a problem’ glasses on last Thursday, for a standard job in well heeled suburb, and look what happened there. You just can’t tell. A week or two ago I’d have willingly criticised the armed cop in Wellington for patently over reacting, but now, with Len in mind, I think I’d shut up. I don’t want to throw the baby of civic freedom out with the bathwater of violent offending, but how do we handle this sort of thing? As the days go on more will be revealed and our sense of bewilderment will subside. Regardless it’s a hard one alright. Let’s leave the slogans alone, and give talkback policy making a miss. With respect for those who have died, and others who may yet die, let’s move back from the precipice together. Arohanui. D