It’s a man’s game. Jacinda Ardern should take over the Warriors. After what was looking like becoming a troublesome season for the Labour team, she has made some tough calls over positional play. I’ll stay in my lane and stick to issues I know a bit about. Another man’s game. Aotearoa’s indigenous gangs.

I felt sympathy for Poto Collins, but I recognise shifting her from her Police portfolio was a political necessity. I think she was doing a good job within a big institution that is slowly improving its culture and adapting to meet the complex challenges of policing in Aotearoa today. The feminisation and increasing diversity of the Police Service muster is one indicator. And there are other changes observable at a community level that are enabling improved community safety and are producing a reduction in offending. I’m well acquainted with the biases and faults of our Police, but I also observe much of the great work they undertake under the radar to reduce offences happening in the first place. “The shooting that didn’t eventuate” doesn’t make great copy in the media!

To some degree I believe that Poto was a victim of sexism and misogyny. Her colleagues Jacinda Ardern and Nanaia Mahuta cop the same sort of ‘soft on’ ‘fairy dust’ derision by males. Government is men’s work after all isn’t it?

Poto called out Opposition Police Spokesman on his wanting to be out there riding shotgun with the “boys”. I have publicly described his behaviour as ‘hyper-masculinity’. It is not a random descriptor and is based on the most recent New Zealand academic publication on gangs “Outlaw Bikers and Ancient Warbands. Hyper-Masculinity and Cultural Continuity”1 written by my friend and colleague the late Dr Carl Bradley BA. MA, PhD.

I think the current Commissioner of Police is highly competent and has a more comprehensive grip on the unique features required for the effective policing of our nation than any of his predecessors, at least those I have encountered since 1972. It is ironic that, according to the Police’s own history2 initially the NZ Police were formed to counter a gang problem, that being gangs of Pakeha sealers and whalers wreaking havoc amongst Maori communities!

I mentioned the work of Carl Bradley (Ngati Hauiti, Clan Donald) who points out that gangs are not a new phenomenon but a continuation of hyper-masculine groups. Tacitus and Julius Caesar were moaning about them, well at least manifest as warbands from Gaul. Long time ago.

Today in the South Pacific gangs arise from colonialism, neoliberalism, and socioeconomic inequality. When I try to convince Tova O’Brien of these drivers, she rolls up her eyes as a member of the court of public opinion. But recently, in a real court, the High Court Whanganui, Justice Ellis, J., sentencing four young men for their parts in the gang-related death of a tribal whanaunga put it like this.

Gangs in New Zealand—and in particular, indigenous gangs such as Black Power and the Mongrel Mob—have too long and too easily been condemned as the cause of a raft of social ills when, in reality, they are symptoms of much deeper problems, many of which stem from our history as a country. I agree with that. For many Māori that history means colonisation, land loss, loss of the reo, marginalisation, compounded later by urban drift. In turn, those things have led to a broken connection with land and with community, the breakdown of whānau, and a loss of identity. Poverty in every sense of the word, but particularly—the reports point out—poverty of spirit3

For a variety of reasons, not all of which have been identified or understood, NZ gang membership has increased. The lack of understanding about the complex nature of the current gang situation in NZ could be attributed to the sad reality that the last time that there was a comprehensive enquiry into the drivers for NZ gang membership, and the realities of gang life for NZ gang members and their whānau, was in 1987 under the chairmanship of Justice Sir Clinton Roper! Just like the observations of Tacitus and Julius Caesar it was a long time ago.

Since 1987 New Zealand has had to deal with the promotion, through social media, of North American ‘gangsta’ hyper materialism, the exploitation of our nation’s porous borders by transnational criminal drug syndicates, and the consequence of Australia’s 501 policy.

The new Minister of Police Chris Hipkins has made a good start to his fresh role by refusing to be railroaded into the response of increased suppression of gangs and use of a bigger hammer. Under his watch we would be best advised to urgently collaborate and have a korero. There are young Māori and Pasifika academics who have been reflecting on their lived experience as children in gang households and who have insights to contribute. There are policemen and former policemen like Chester Burrows and matua Alf Filipina who have had epiphanies and can enlighten the debate. There are public sector fossils like me who carry institutional memory and understand both the machinery of government and have a sense of the soul of communities. And there are wahine toa ready to help willing men to build a better future for themselves and those they love and are loved by.

Now, how do we get Jacinda Ardern to sort out the Warriors?

2 Hill, S. (1986) The History of Policing in New Zealand. Policing the Colonial Frontier. The theory and practice of coercive social and racial control in New Zealand, 1767-1867. Dept Internal Affairs 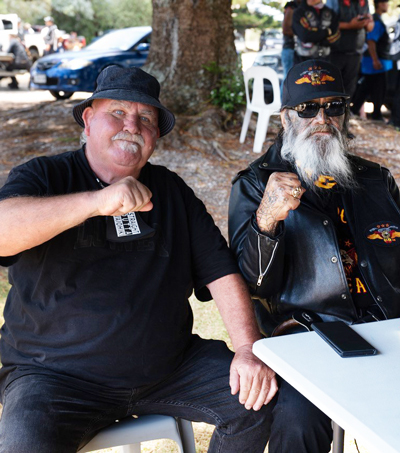 If we don’t learn from the past, we are doomed to unsuccessfully grapple with present and future social problems. The Prime Minister Jacinda Ardern calls these problematics ‘wicked problems’. They are…