COUNTING THE BEATS
Global Census of New Zealanders – Hurry – survey closes Sunday 7 May!
Like NZEDGE, Kea (previously the Kiwi Expats Association) http://www.keanewzealand.com believes that connecting the international population of New Zealand is a vital part of our national purpose and groove moving forward. Kea has instigated a global census of New Zealanders. To date 28,000+ New Zealanders in 160 countries have responded. Please participate – your input is extremely valuable. The survey is based on the NZ Census and Kea will produce a research report with the findings after the survey closes. Please hurry as the survey ends on Sunday 07 May. To fill out your survey rush to http://www.everyonecounts.co.nz. There are some exciting prizes available, but you have to be in to win!

Recent ads run by NZEDGE include a series in the recent NZ International Festival programmes in Wellington to highlight the whereabouts of the million or so New Zealanders and families living in the world (new ads are bottom right).

Registered at NZEDGE.COM are people from a 1000+ locations. Our whanau whanui ki te Aonui. Being an exceptional team of five million is a goal shared by both NZEDGE and Kea – New Zealand’s Global Talent Community.

WORLD NEWS OF NEW ZEALANDERS /category/newzedge/
From the online pages of the world’s media, stories of New Zealanders making their distinctive touchpoint on the planet include:

Here is a link to the digital version of the magazine LINK, which will stay live until June 30. If you are in the States, head into one of 1,800 magazine sellers nationwide including your local Borders or Barnes & Noble to get a copy of the issue # of the magazine which features tangihana, glacier heli-touring, paua, rugby, Pinot Gris, Peter Gordon’s Dine, Dick Frizzell, Hawkes Bay, Antarctica, our Wairarapa Stonehenge and fishing with the ghost of Zane Grey.

# 11: Reo of the Nation
From P to Parihaka and the Pentagon, Den travels the inspirations and issues that make us lively in Aotearoa 2006: the continued exposure to te reo Maori and the repetitive cultural rituals that refuel the soul; the Parikaha Interational Peace Festival and a debate held on the site of Te Whiti’s house about an alternative approach to methamphetamine; a new sense of cultural fusion in Taranaki; new projects at the Waiohiki Creative Arts Village in Hawkes Bay and the Mokai Whanau Ora project in Wellington; Maori Television; media tripe; and Kiwi or Iwi? – “will we be brave enough to use a bicultural approach to create a sense of place and space rather than a division?” read more

# 10: Crime and Punishment
9,000 New Zealanders will be imprisoned by 2010. Re-offending is running at 86% within five years of release. Programs to overcome illiteracy, drug and alcohol addiction are remote. There is a massive racial skew. About a billion dollars is being spent on building more prisons. Denis notes Finland had a higher rate of imprisonment than NZ, but halved it. Via a Whanganui gang scrap between the Mongrel Mob and Hells Angels, a run-in with Mayor Michael Laws, and a salute to Robert Muldoon’s “intelligent pragmatism and genuine humanitarianism”, Denis makes a challenge for sustainable strategies that are inclusive, that invest in people’s lives and help them find what is more meaningful in their lives than substance abuse and self-defeating behaviour. Plus a jab at the classic Kiwi “we gotta do something” response to the matter of P. read more

JANEINSIDE
JaneInside is a New Zealand teenager’s journey from the age of 12 to 21. While it is Jane Thomsen’s own story, it could apply to any teenager in any town. The book is about Jane trying to fit in and find out who she should be as opposed to who she is. This leads to a downward spiral at school, relationship problems, drugs and her own near suicide. The story provides a unique teenager perspective on suicide, drink driving, abortion and abuse.

“Five stars. This is a must-read for all ages. It’s raw, it’s real and it’s a true story.” NZ Girlfriend. “What an awe-inspiring book! A true account from a parent who isn’t in denial about what it is like to be a teenager. JaneInside gave me a greater understanding of why we as teenagers feel the way we do.” Keisha Castle-Hughes. “This is one extraordinarily powerful book…a unique teenage perspective on dysfunctional family relationships, school problems, peer pressure…Jane’s voice is gritty, to the point credible teenspeak.” Malborough Express.

Prince Obolensky Lecture
In February NZEDGE.COM co-founder Kevin Roberts gave the Prince Obolensky Lecture to a British parliamentary audience at the Foreign and Commonwealth Office in London – a tour through what makes the All Blacks (“obsidian warriors”) so compelling, and a swathe through the issues and solutions to the great global game.

Six Nations Sub Optimum
”The Northern Hemisphere is suffering from too much rugby played in sub optimum weather conditions. Teams are over programmed defensively, over coached, and under skilled. Injuries were common place reflecting an impossible playing schedule and outdated conditioning training. There’s a lot of ground to be made up in the next 12 months to prevent the All Blacks, the Springboks and, I’m sure, a resurgent Wallaby side under Connolly, from dominating World Cup action in France.” < Kea AWARDS WORLD CLASS NEW ZEALANDERS
Seven high achieving New Zealanders were honoured at a gala dinner in Auckland in March for their individual achievements and their global impact on New Zealand’s reputation and economy. Congratulations. The winners:

– Information and Communications Technology: Dr Mark Billinghurst of the Human Interface Technology Lab at the University of Canterbury.

‘the long white book’
Congratulations to Paris-based Roderick Fry and Laurence Varga ofmoa – meubles et objets de aotearoa – Design de Nouvelle-Zélande – for their publication ‘the long white book’ www.longwhitebook.com. 39 participants including NZEDGE.COM and projects from New Zealand’s most renowned designers, architects, photographers, artists, craftspeople and brands featured in this 110 page international publication. Introduction is by Paris-based NZ architect Brendan MacFarlane (renowned for restaurant ‘Georges’ in the Pompidou Center). Says Roderick Fry, “people have been waiting to see design from the South Pacific that epitomizes the lifestyle, cultural mix and creativity they associate with the region – and we have shown houses, furniture and art that astounds everyone with its innovation.”

MAILBOX
Much mail received since Jan 01, here are four samples:

London: “I’ve been away 17 years and English friends are still asking “Don’t you miss it?” and I’m still replying “Only every f@**ing day”. Keep me in touch.”

Sydney: “Great site but feeds the small-minded Kiwi with all the bullshit he needs to carry on with all this “God’s Own Land” crap. New Zealand is a small dot on the earth that most of the globe don’t know exists. I lived in NZ for some years and have a good laugh each time I return to see my family. It is a backward country and its people speak with shocking accents. Leave your little island and get out in the real world – you may like what you see.”

London: “Dear New Zealand, When are you going to wake up and recognise the 90’s generation you have financially raped with student loans interest? We had no advice, no protection, no role models – you took a generation of children and financially crippled them. It pains me to hear NZ crying out about talented expats overseas and spending huge sums on tourism-style advertising to get us home. Do you think we don’t know how beautiful NZ is? Do you not think we miss our family, friends and the NZ way of life? I love you NZ, but what you did to us really hurts! It won’t ruin my life but it has stolen years from me.”

Brisbane: “We came to OZ in ’99, thought we’d give it five years see how we go, make some money, and eventually return home. We are now looking at selling up, we’re a bit nervous, no jobs to return to, have the people changed? It is a big risk but at least now we’ll have enough for a deposit for our own home back in NZ…I haven’t returned once since I left, couldn’t afford to, not even when my youngest brother passed away. So, for me it will be a bitter-sweet return.”

Thanks for sticking with this 4-month update. Nice sunset below for your effort.

To unsubscribe, hit reply, enter UNDO in the Subject line and then Send. 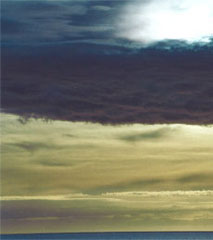