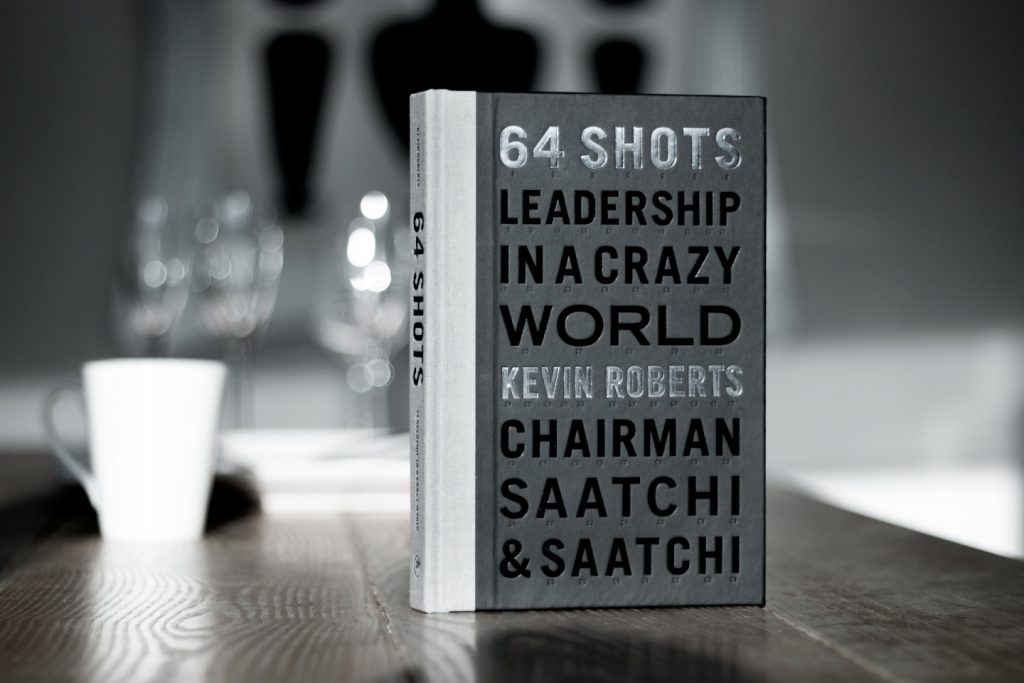 The locus of this new book by Kevin Roberts is the here-and-now of a volatile, uncertain, complex, and ambiguous world. The focus is on leadership of big ideas where the world is made a better place through business.

Kevin Roberts has assembled everything he has learned about business: operating style; teaching method; framework and formats; forward focus. He sets out to inspire, unleash and entertain, and he delivers.

The heuristic 64 bite sized chunks, “shots”, promote reflexivity and praxis. Why 64? That’s the connective magic in the storytelling. These insights follow a linear logic that result in a coherent and holistic compendium that illuminates, encourages activation, and fosters accelerated pace. Whilst capitalist in context, it is Marxist in nature in the sense that it seeks to change the world rather than describe it.

The 64 shots Roberts says are strikes to the solar plexus: that crossroad of nerves at the pit of the stomach. These are meant not as an attack, but rather as a means to get the reader’s attention and enable self-freedom from self-limiting beliefs.   He says the skills necessary for the leader of today must be meta, macro and micro; soft and hard; strategic and creative; directional and executional.

Roberts curates the wisdom of others – he says he stands on their shoulders. One of the devices he uses is practically semiotic – a gallery of 64 photographic shots, strong facial images of a “pantheon of leaders” – so that the reader gets a sense as one might from the photos in a meetinghouse of a sort of whakapapa of those who have influenced and inspired him.

In fact the compatibility of Robert’s thinking with Maori thought lines and world view is striking and it excites me. As do Maori, he deals in dualities, the continuum of the conscious present, the metaphoric “wind of the past (hau muri) and wind of the future (hau mua).” He talks not of team but of interconnected and interdependent whanau (family). His Lovemarks matrix is defined by axes of mana (respect) and aroha (love). And then there is the theme of the spirit, te taha wairua, which Roberts offers as the magnetic power that harmonises across the horizontal and vertical planes of our lives and their contexts.

Let me personalise this. In an age where we are grappling with self-defeating fundamentalism and the crisis of meaning and belonging evident in our cities worldwide, I see 64 Shots as a spiritual treatise to assist activists like me to combat poverty despair and alienation.

Change happens on the edge and it is at Aotearoa’s social edge that my efforts are deployed. I’m going to use 64 Shots as epistles for change. Like an evangelist I’m going to target every Maori leader, both formal and informal, every Maori entrepreneur and social activists I know and say brother, sister, let me share this with you. Let us build a business-based self-liberation movement in Aotearoa.  Let’s create the big ideas to enthuse and motivate ourselves and each other and then let ‘er rip.

Denis O’Reilly is one of New Zealand’s most capable community developers working for both economic prosperity and a better society. With international experience working in large-scale industry change programs, Denis describes himself as a recovering bureaucrat with a background in street activism and community development. Denis holds a notion that the people of Aotearoa are our nation’s most valuable resource, but, that somehow we’ve turned a gifted and resourceful portion of our population into an alienated, marginalized and imprisoned underclass. He promotes pro-social behavior, high rates of social and economic participation, and high value contribution amongst unrecognized and even unlikely knowledge workers, innovators and entrepreneurs. Denis a Master’s Degree in Social Practice, and is a life member of Black Power.