Air New Zealand has been judged by Business Insider as having the “coolest airline paint job in the world”, ranked first out of 15 international airlines with striking exterior designs.

“As airlines and airplanes have evolved, so have their “liveries” — the exterior designs, including paint colors and logos, on the aircraft,” says Business Insider.

“As planes crisscross the globe, their exterior graphics not only represent the companies that operate them, but in many instances also serve as visual ambassadors for their respective homelands.

“A great airline livery gives onlookers a taste of a carrier’s values or its culture’s ethos in an attractive and effective color scheme.”

The “classic” Air New Zealand planes with their teal-and-white livery, dominated by the Maori Koru logo on the tail, “are a pleasure to look at.

“However, as good as the normal paint scheme may be, this carrier’s specialty jobs are even better, like its Boeing Dreamliner, painted in honor of the country’s all-conquering rugby squad – the All Blacks.

The Hobbit-themed design that promotes the movies filmed in the country is called out by Business Insider. “As the ‘Official Airline of Middle Earth,’ it’s only fitting that the fearsome dragon Smaug adorns the sides of some of Air New Zealand’s planes.”

The idea to decorate the exterior of Air New Zealand’s planes in black was first floated in 1998 by Saatchi & Saatchi CEO Worldwide Kevin Roberts and NZEDGE.COM founder Brian Sweeney. 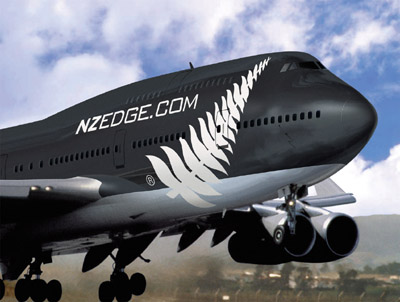 Ahead of the 1999 Rugby World Cup Roberts proposed a special livery for the plane carrying the All Blacks to the tournament, and Air New Zealand obliged with an image of the All Blacks front row of Carl Hoeft, Anton Oliver and Kees Meeuws on a 747-400.

In 2002 and 2003 Air New Zealand marked its position as “the official airline to Middle Earth” by decorating three planes with The Lord of the Rings imagery, applied as giant decals. The decal material was described in airline publicity as being as thin as clingfilm and weighing more than 60 kilograms (130 lb). During 2011 and 2012, six aircraft were painted in an All Blacks inspired livery. The planes are completely black, with a silver fern motif covering the aft section of the fuselage.

A rebranding, possibly one of the biggest in the airline’s history, was announced in July 2012. They moved to a black colour in a joint effort between Air New Zealand, New Zealand design agency Designworks and renowned Kiwi typographer Kris Sowersby, as well as a new logo typeface. The tails of the aircraft and the typeface were black, with the rest of the fuselage remaining, and the engine nacelles in silver. The iconic koru was moved to the right of the words, as it was originally.

Then CEO Rob Fyfe said at the time: “Black has resonated well with our customers and staff who identify with it as the colour of New Zealand and a natural choice for our national airline. It inspires pride, is part of our Kiwi identity and a symbol of Kiwi success on the world stage.

Another new livery was announced in June 2013 in conjunction with a Tourism New Zealand joint marketing program. A select number of planes received a distinctive all black livery with the fern in silver. Extensive consumer surveys by Air New Zealand revealed 78% believed the Fern Mark fits with the airline brand and represents New Zealand.