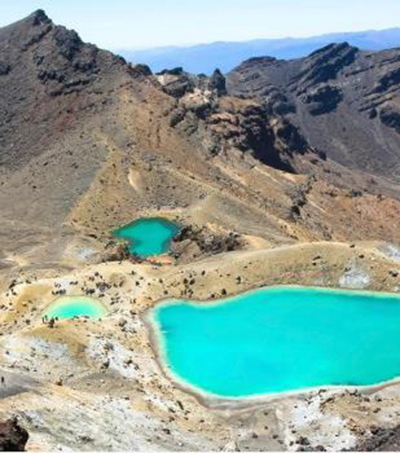 Tongariro Crossing One of the World’s Best One Day Walks

“Believe the hype.” Andrew Bain writes about the Tongariro Crossing for Traveller magazine, in a list of eleven of the world’s best walks you can do in one day.

“Regularly billed as the best day walk in New Zealand, and sometimes the world, the 19-kilometre Tongariro Crossing is where volcanoes come to show off.”

Up the top of the walk you can view the “striking, iridescent” Emerald Lakes on a landscape that looks otherworldly.

“Funnelling between the twin peaks of Mt Tongariro and the perfectly conical Mt Ngauruhoe, the Crossing passes impossibly coloured lakes, climbs by steaming craters and in recent times stares across at the newly boiling Te Maari crater, which twice erupted in 2012.

“Some of the Mordor sequences from Lord of the Rings were filmed here,” he writes.

The neon blue colour of the lakes is because of their high sulphur content.

Buses from nearby towns can drop walkers at the start and pick them up at days end.