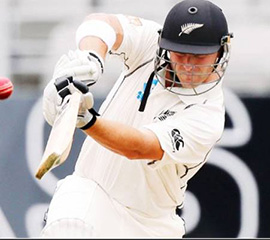 A Test Win for the Ages

Test cricket’s status as the most important and exciting form of the game was given a resounding endorsement with New Zealand’s win over India at Eden Park, Auckland. Sports journalists thumbed the thesaurus in search of adjectives to explain the “pulsating”, “thrilling” last day theatre in which both sides had chances to win the game.

The Times of India was generous in its coverage of the drama, refusing to blame the umpire for cutting short Rohit Sharma’s innings and singling out New Zealand bowlers Tim Southee and Neil Wagner for praise before mournfully noting India’s inability to close out a game it almost won.

It was a brilliant match, enlivened by a strong turnout from Auckland’s Indian community, the self-styled Swami Army, who belted out pop tunes adulterated to fit the occasion. The White Stripes’ Seven Nation Army reworked in praise of all-rounder Ravi Jadeja was a standout.

India started the day 87 for the loss of one wicket and needing 407 runs; New Zealand required another nine wickets and was immediately rewarded in the morning session. Southee’s opening spell of six overs, three maidens, one wicket, four runs conceded was outstanding.

But Sikhar Dhawan (115) and superstar Virat Kohli (67) posted a 126 run partnership and Kiwi fans were facing the unpalatable prospect of losing despite enjoying a 300-plus run advantage on the first innings.

The hero for the home team was workhorse third seamer Neil Wagner, whose persistent aggression and pace accounted for both Dhawan and Kohli, the latter, critically just before the new ball was taken. As ESPN Cricinfo’s Abhishek Purohit noted, this was the day “the desk guy outshone the star anchors at the channel”.

The new ball accounted for both Rahame and Sharma before Jadeja and captain MS Dhoni struck 54 runs in just over five overs in an astonishing fightback. The tension was thicker than Auckland’s humidity; too much for one Indian fan who ‘retired’ to the smoking section rather than watch the last nail-biting overs.

No side has ever scored more than 400 runs in the fourth innings at Eden Park and in the end, India fell short by 40 runs and the Black Caps had achieved a famous victory over the world’s No. 2 test side. The second test is at the Basin Reserve and starts on Friday (NZ time).