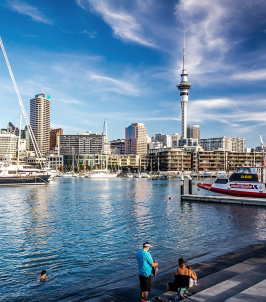 Our Salmon is Better

The South China Morning Post is touting New Zealand’s credentials as the next “Canada” for rich mainland Chinese seeking fresh pastures. “An influx of deep-pocketed mainland Chinese has helped New Zealand reach its highest intake of immigrants in more than 10 years,” writes the Post’s Adrian Wan.

New Zealand’s net migration surged to an 11-year high of 31,900 in the year to March, with China topping the long-term arrival tally with 6,200.

About half of these arrived through the investor scheme, whereby people who invest NZ$10 million over three years are granted residency even if they don’t have English language or business skills. There is a cheaper category of NZ$1.5m invested over four years but requires English competency.

Canada was a prime destination for China’s rich but the Cannucks restricted their visa scheme when it was inundated with mainlanders seeking citizenship, reports the Post.

New Zealand was attractive, according to Chiwi Immigration Services head Ming Tiang, because of the “beautiful environment, good weather and living standard”.

Despite the high asking price for residency, demand for New Zealand was high, he said. And a major obstacle is getting the actual money out of the country, given the strict rules around capital outflows which limit the annual transfer amount to 50,000 yuan (NZ$9,328).

A new Bank of China service, however, is allowing up to 10 million yuan transferred, although this attracts scrutiny to ensure the money is legally earnt.

The second and third highest numbers of immigrants to New Zealand came from India (6,100) and Britain (5,800).