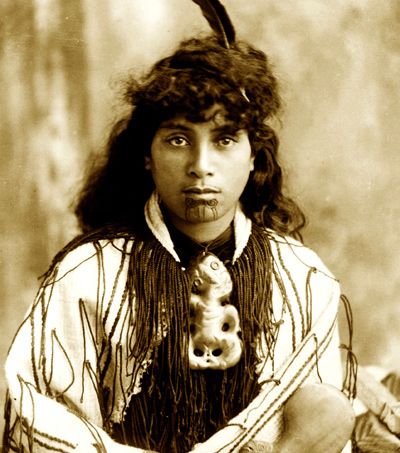 Daily Mail reporter Ben Hill explains how Bradley used a digital camera to take photos of 48 people with ta moko – Maori traditional tattoo markings – and developed them using the wet plate collodion technique, a developing process that was popular in the 1800s.

The process requires pouring collodion on a glass plate, “before it is bathed in silver nitrate [and] loaded into a wooden camera.” Next, the photograph is taken and placed in a chemical mix to be developed.

With the wet plate method, the tattoos are almost imperceptible in the resulting photographs. “I noticed that the green, blue shades looked like they were most likely to disappear, especially on someone with slightly darker skin, and this sparked the idea,” the photographer told PetaPixel.

According to Hill, Bradley hopes to use his project as a way “to tell the story of ta moko and the practice’s connection to Maori culture.”

“The problem is, when photographs of ta moko were originally taken in the 1850s, the tattoos barely showed up at all,” Bradley said, explaining how the technique used by European settlers when New Zealand was first colonised “served to erase this cultural marker.”

“The ancient art of ta moko was increasingly suppressed as Maori were assimilated into the colonial world,” he continued.

The title of the exhibition, Puaki, is a Maori word that means “to come forth, show itself, open out, emerge.”

Originally shown at the Waitangi Museum in 2018, the photographs will be exhibited in museums and galleries nationally and overseas.

Auckland-based Michael Bradley has been a photographer for two decades, specializing in commercial food, editorial and sports photography.