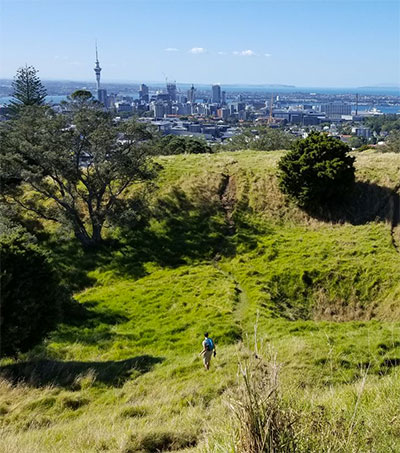 “Sweet as what?” Boston Globe correspondent Ron Driscoll asks. “No matter. A New Zealander saying ‘Sweet as’ means it’s all good, or very good, or even cool. You have the correct change? ‘Sweet as.’ You’d like to sample the IPA? ‘Sweet as.’ You’re from Boston? Yeah, that too.”

“[The 26-hour journey] was worth the effort, and we would gladly do it again to see more of this mesmerising country, where north is warmer than south and autumn runs from March through May. We arrived at the start of the fall, a highly recommended time to visit,” Driscoll writes in the newspaper’s travel feature.

“We spent our first two days meandering and motoring about the ‘City of Sails’, which is all but surrounded by harbours, inlets and bays.

“Even the Sky Tower looks small from Mount Eden, a dormant volcano that rises about 196m above the city and offers panoramic views of Auckland and the Hauraki Gulf (Hauraki means north wind in Māori). The plunging slopes of the volcano’s cone are grassed over, but it once housed a Māori village and the cone’s interior is considered sacred ground. A nearby marker charts distances to important landmarks, near and far (Moscow lies 16,202km to the northwest).”

From Auckland, Driscoll travels to Cambridge, Rotorua, Hawke’s Bay, and on to Wellington.

“We savoured seafood at the Dockside restaurant on Queens Wharf on our last evening, thankful for the gentle breeze that accompanied our post-meal stroll. We crossed the funky City to Sea pedestrian bridge, passed a pickup soccer game and a statue of acclaimed writer Katherine Mansfield, then packed for the return to Boston, where ‘Sweet as’ would be replaced by ‘What can I get yez?’”