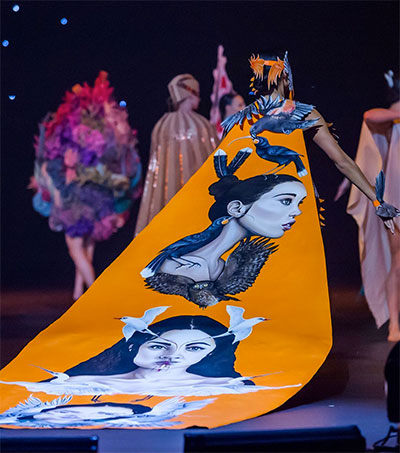 “The idea, Suzie Moncrieff said, was to ‘take art off the wall and on to the human body’. From Moncrieff’s concept, WOW – World of Wearable Art – evolved into a show that was staged in 1987 in the bohemian town of Nelson. By 2005, it was so successful that it moved to the North Island and the largest theatre in Wellington, the capital, where more than 60,000 people attended during its three-week run,” Amanda Jones writes in a travel piece for the Los Angeles Times.

“Couple that amazing show with its timing in New Zealand’s off-season – 27 September through 14 October this year, when the weather tends to be iffier but flights and hotels are cheaper – and I had ample incentive to go,” Jones writes.

“If there remained any doubt about whether I should, my mother provided it: It was her dream to see the show.

“I flew from the US, stopped in Auckland where my mother lives, and together we flew an hour to Wellington, where we checked into the QT Hotel, known for its bleeding-edge modern art collection.

“It’s so bleeding edge that the hotel is allowing 19 artists to create murals, paint, spray paint and put photos on the walls of 25 rooms. To be considered, artists must submit their work, and if they’re chosen, they are let loose. Between that and the millions of dollars’ worth of modern art hanging and sitting in seemingly every public space, and the hotel is a must-see, even if it’s just for a glass of wine.

“After dinner at QT’s lavish Hippopotamus, the hotel’s neo-Baroque, French-meets-Kiwi restaurant, we walked the half-mile to WOW.

“There was a hum of exhilaration as the lights dimmed and dancers and models sprang onto the stage. Imagine Paris Fashion Week meets Cirque du Soleil and Burning Man.

“The show left us thinking had it been in New York, Las Vegas or Paris instead of in the world’s nether regions, there would be a wait list and ticket prices in the thousands.”