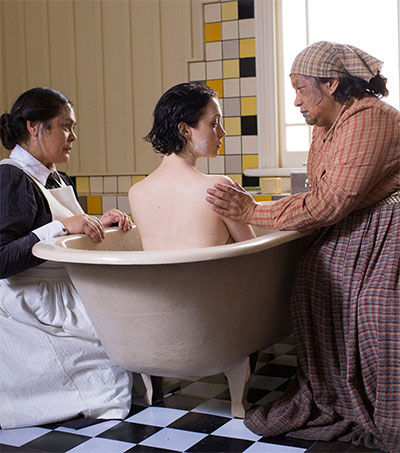 “Set in rural New Zealand, the movie begins in the late 19th century, with the death of the father of Paraiti, a Maori girl, at the hands of white settlers, in a conflict that leaves her permanently scarred on her cheek. You might assume that a story of vengeance awaits, but it does not, at least how you would expect.

“Move ahead to the early 20th century. Paraiti (Whirimako Black) has become a respected healer and midwife versed in Maori medicine, so renowned that Maraea (Rachel House), the Maori housekeeper for a landowner’s wife, enlists her help. Maraea’s mistress, the insulated, petulant Rebecca (Antonia Prebble), is pregnant, and seeks to induce the birth – for reasons we eventually discover – before her husband, a businessman, returns from an extended trip. Maraea knows Paraiti has the skills, and the discretion, for the job.

“What ensues is Rebecca’s agonised regimen as she approaches labour, accompanied by the simmering antagonism between Paraiti and Maraea, who condescendingly refuses to address Paraiti in their native tongue. And Rebecca and Maraea certainly have issues of their own.

“Black, a New Zealand recording artist making her film debut, and House, both actresses of formidable presence, are well-matched opponents. Prebble, too, has reserves of power.

“White Lies has a Maori title, Tuakiri Huna (meaning “hidden identity”), that gets at the heart of its revelations. But it’s the movie’s delineations of oppression – cultural, sexual and familial – that will haunt you.”