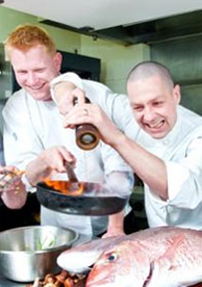 When tickets went on sale for pop-up restaurant WLG in Fitzroy run by New Zealand’s best chefs, 500 seats were sold in 25 minutes. The temporary restaurant, named after Wellington’s airport code, opens for two weeks. Wellington-sourced produce brought over from New Zealand for Melbourne diners includes 110kg of smoked salmon, 125kg of strip loin and braising venison, 38kg of lamb and 12kg of spicy olives, as well as locally-produced beer and wine. Some of the chefs behind the pop-up include Rex Morgan, Shaun Clousston and Jacob Brown. Wellington has more bars and restaurants per capita than New York City, says chief executive of Positively Wellington Tourism David Perks. This is the second time Wellington has had a pop-up restaurant in Australia. Last year, it was a sellout in Sydney.