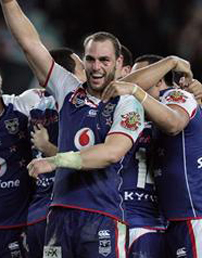 The Warriors have touched down in Sydney in preparation for Sunday’s NRL grand final having defied the odds to win against the Storm last weekend. Despite claims the team is favoured to win the grand final thanks to their exhilarating win last week, Warriors coach Ivan Cleary is under no illusion of who will go into the match as underdogs. “It’s pretty obvious who the underdog is,” Cleary said. “Manly deserve to be favourites. They’ve been right at the top and have been one of the best sides all year and go into this game with great form and a lot of experience.” However, Cleary remains positive the team will put up a good fight against the Manly Sea Eagles: “All our preparations have been spot on so far. I’m pretty happy with where they sit. They’ve been enjoying things as well, not ducking away from anything, just taking it all in.” Hype for the match is building in Sydney, with both Kiwi’s and Sydney-siders coming out in support of the Warriors. “It’s going crazy everywhere we go,” Warriors five-eight James Maloney said. “It’s great. There’s a great vibe and a big build-up. We’re enjoying it.” The Warriors will take on the Sea Eagles at a sold-out match at Sydney’s ANZ stadium kicking off on Sunday at 7.20pm NZT.