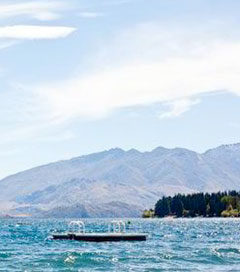 “‘If you’re walking up to Lake Crucible, then it’s a good grunt,” explains the lady checking us in for the Siberia Experience; one of the most spectacular ways of seeing the Southern Alps of New Zealand. ‘Grunt?’” Daily Express journalist Rachel Corcoran asks. “Apparently it’s a Kiwi word used to describe an arduous hike, which is exactly what I’m here to do, and we’re soon setting of for the six-hour round trip to Lake Crucible. It’s a deceptively gentle start through the valley and we feel dwarfed by the immense landscape around us. The terrain gets more challenging as we wade through streams so cold I think my head might explode. When we reach the Crucible Stream, we enter a forest and embark upon a vertical scramble alongside a waterfall up a path riddled with tree roots. It’s worth the climb, though, because when we emerge out of the trees, there in the distance at the foot of Mount Alba is Lake Crucible. We trek on and the final steep track ends with the prize; the breathtaking spectacle of an otherworldly glacial lake lined with floating icebergs. We’re based in the River Run Lodge in Wanaka, a mountain-lined lakeside town in the Otago region just an hour from the home of the bungee jump, Queenstown. In the Antipodean winter, Wanaka boasts some of New Zealand’s best ski fields, such as Treble Cone and Cardrona Alpine Resort. No trip to this part of the world is complete without sampling some of its homegrown produce. Otago sits on the largest schist in the country, which makes the soil porous. This, coupled with the climate, makes for perfect conditions for pinot noir, pinot gris and riesling grapes. And what better way of ending our stay than by sitting by the lake among the vines toasting the snow-capped peak of Mount Aspiring in the distance.”