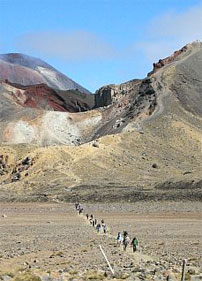 Walking on the Moon

Tongariro Alpine Crossing has been included in the online travel adviser Cheapflights’ top ten hiking destinations list alongside the Appalachian Trail and Mount Kilimanjaro. “New Zealand continuously tops adventure travel lists thanks to its collection of breathtaking terrain. Surprisingly, the bleak and cratered landscape of the Tongariro Alpine Crossing is no exception. Many hikers say it initially resembles the surface of the moon, but once underway, it’s evident that this 18.5km hike is anything but bleak. As a World Heritage Site, Tongariro Alpine Crossing encompasses two active volcanoes, piercing aquamarine lakes, mud pools, snowcapped peaks and alpine meadows. Not only has it become a popular spot for hikers and tourists alike, Tongariro plays a spiritual role to New Zealand’s indigenous Maori people. Getting to and from the Crossing is easy and all hikers complete the journey in seven to eight hours.”