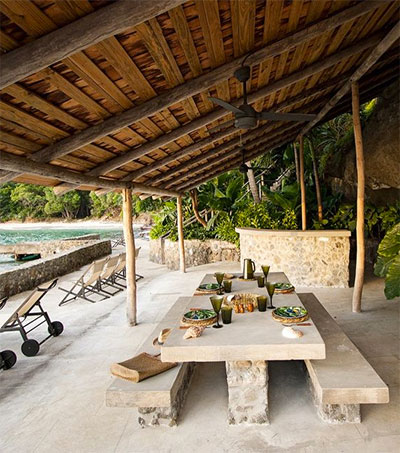 On the Caribbean island of Mustique, interior designer New Zealander Veere Grenney has redesigned a bamboo house that is a study in neutrals and natural materials, set off by the green of the palms outside and the glorious blue of the ocean, Elfreda Pownall writes in a UK House & Garden feature.

Grenney knows Mustique well, and had already designed half a dozen homes for this client before he bought one of the island’s most unusual houses in 2007.

Grenney describes it as “a beach folly, a little Robinson Crusoe bamboo paradise”. The original house had been built in the Seventies by the Swedish architect Arne Hasselqvist for the American advertising dynamo Mary Wells Lawrence and her airline president husband Harding Lawrence. They used the place almost as a bathing hut for their vast home at the top of the island.

When Grenney and his team first encountered the house in 2008, a tropical storm had ripped off some of the roofing and caused a cliff fall below the house. They walked into the main building to discover the original Serge Roche standard lamps encrusted with debris and dust, the shell wall lights wrecked and the bamboo wallcovering looking shabby. With the help of architect Alain Bouvier, Grenney stripped everything back to its bones, expanded the living space, installed a new larger kitchen and reconfigured many of the rooms.

The bamboo, a traditional building material in the Grenadines, came from nearby Saint Vincent, where it is always harvested when the moon is on the wane. The belief is that termites quickly devour any bamboo cut when the sap is rising, even once the wood is cured. The team then went in search of vintage bamboo furniture and bought it in container loads, mostly from Los Angeles and Miami.

Grenney is originally from Auckland. He left New Zealand when he was 22, eventually ending up in England. His first interior role was as an apprentice with renowned designers, Mary Fox Linton and David Hicks.

He set up his own studio, Veere Grenney Associates, in London, in 1997.