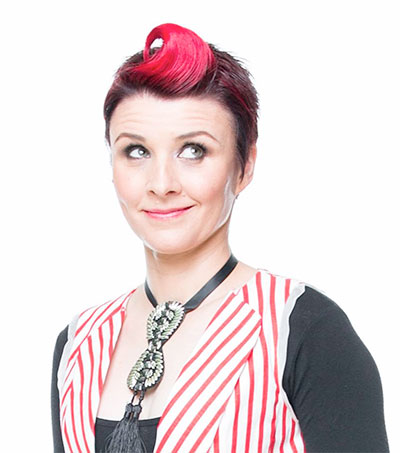 At 43, New Zealander Cal Wilson woke up and found herself wearing a photocopy of her mum’s face. Wilson re-enacted that confrontation and many others pondering the roads not taken on stage at the Edinburgh Fringe Festival.

Wilson is an accomplished actress and clown. She spends time with each of her possible selves, then deftly spins into scenarios where they meet, fall in love, and get on with the messy business of living.

She does this while manipulating increasingly ludicrous props that obey hekov’s first rule about guns on walls.

Nothing on this stage is there purely for decoration and her gimmicks were goofy enough to earn applause, prompting her to yell at us for clapping for “shit singing and moustaches on sticks.”

Wilson’s use of language – especially when mocking science fiction or cracking cat jokes – is masterful. She takes well worn tropes, such as the children’s entertainer who’s more drill sergeant than clown, the dipsomaniacal window, and the Lord Flashheart-style author, and ratchets up the ridiculous until her audience dissolves in helpless puddles formed from their tears of mirth.

Wilson co-founded the Court Jesters improv group in 1990 and was part of the New Zealand team that won the World Theatresports title in Los Angeles in 1994.

She lives in Melbourne.