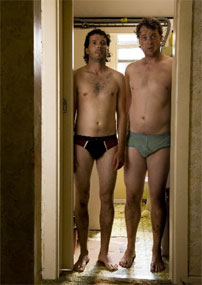 Up to No Good in the Caitlins

Flight of the Conchord Bret McKenzie and Australian comedian Hamish Blake star in a screwball manslaughter comedy who end up on the road trip of their lives in the feature film Two Little Boys, which premiered at this year’s Berlinale in the Generation section. “Director Robert Sarkies’ off-key third feature, based on a screenplay by his brother Duncan, adapting his own 2009 novel, has McKenzie front and centre as one half of a dysfunctional buddy pairing that puts the clueless characters of Dumb and Dumber in the shade,” Hollywood Reporter reviewer Megan Lehmann writes. “New Zealand’s south basks in the loving gaze of Jac Fitzgerald’s lens as daylight waxes and wanes over one weekend.” Two Little Boys hits New Zealand cinemas on 15 March.