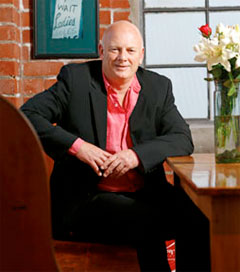 Is an actual, physical, deadly and devastating earthquake too obvious a metaphor for personal upheaval? Sydney Morning Herald journalist Sally Pryor asks New Zealand author Lloyd Jones. Perhaps, he says, but in his case it was. Jones had grown up with what amounted to no family history. His parents never spoke of their parents, and neither he nor his siblings ever asked.

It’s a fact that astonishes him now, but when he looks back to the kind of family life he had, he can see that the forgetting was something done wilfully. His parents had reasons to discount their respective pasts, and their children learnt to see the past as something not worth dwelling on.

“Christchurch sat on similar foundations,” he writes in his new memoir, A History of Silence. “It, too, had grown out of a deliberate forgetting of what it sat on. Swamp. Peat. Trapped Water. River Gravels.”

The book is a type of unearthing, of his own history. And, he says, had the earthquake not happened when it did, he would never have thought of writing it.

Jones says he hopes that, at the very least, his book will make others think more about their own families.

“[Christchurch] forgot its history, and so had I,” he says.

Jones is the author of the Commonwealth Writers’ Prize-winning Mister Pip and Hand Me Down World.