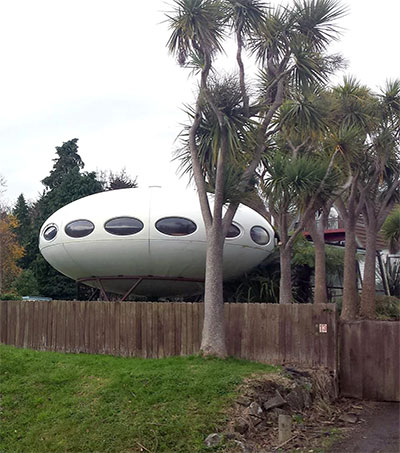 UFO Home for Sale in Warrington

A rare spaceship-shaped home located in Warrington and designed by Finnish architect Matti Suuronen in 1968, is for sale, attracting international interest as sci-fi and architecture nerds scramble to secure a UFO abode by the sea.

Futuro houses were created as pre-fab, portable ski chalets. Shaped like an egg and constructed from fibreglass-reinforced polyester plastic the unusual houses became cult designs, with less than 100 ever produced.

“There is something magical about the shape of an egg, it’s smoothness and strength and the spaceship is like that; it is an iconic shape that attracts you to it,” says Juanita Clearwater, an architectural designer, who is selling her beloved Futuro for $400,000.

“Futuros get under your skin, it is like an adult treehouse.”

Clearwater bought her Futuro, which features built-in furniture and a spaceship-style hatch entrance, four years ago as a holiday home in the small coastal village of Warrington in Otago. Combining her love of sci-fi with 1960s architecture, owning one was a life-long dream.

Clearwater’s futuro was one of 12 built in Christchurch under licence and was displayed at the 1974 Commonwealth games before being transported to Warrington in 1975.

“It has been beautifully preserved and is probably the best ship in New Zealand and in the best location,” she says.

“I want it to go to someone who, like me, has wanted one their whole life. It is time to pass it on.”