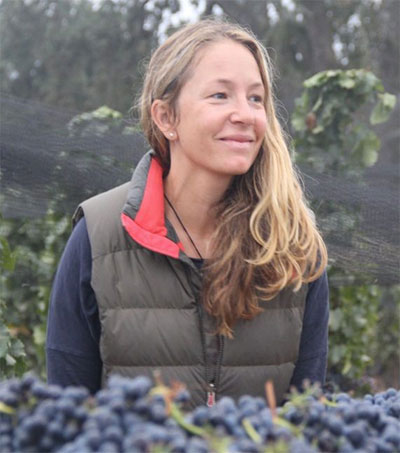 California didn’t always produce top-quality Grenache, but these Central Coast growers, including New Zealand-born Angela Osborne, are changing that by focusing on varietal bottlings to produce terroir-driven wines on par with top-shelf Pinot Noirs – but often at half the price.

For Osborne, who planned to be a documentary filmmaker, her introduction to Grenache came when she worked a harvest job in Sonoma 16 years ago. The variety isn’t really grown in her homeland.

“It flipped my world on its axis,” she says, surprised that it wasn’t overly extracted like the versions she knew from Australia. “It influenced me to pursue winemaking as a career, and specifically, Grenache.”

In 2007, sips of Château Rayas opened her eyes further. “It had this translucent, pale hue,” she says. “That was a monumental moment, to know that you didn’t really need colour to have power or make a lasting impression.”

Two months later, Osborne started A Tribute to Grace Wine Company. She now makes about 3000 cases per year across nine Grenache bottlings from the Central Coast as well as the Sierra Foothills and Dry Creek Valley.

She navigates the barely ripe side of the Grenache frontier, which wins over sommeliers, but can confuse others. “There’s still one restaurant that has my wine in their rosé section,” she says with a laugh.

“It sounds cliché, but when Grenache is made in a gentle manner, the grace that the wine carries is something that is very powerful for me,” she says. Osborne foot-treads her grapes, sometimes with her young children. “I work with really different microclimates, so terroir has a loud voice.”