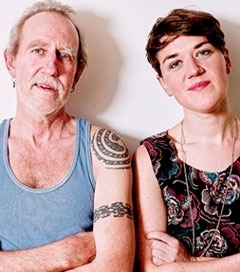 Travelling the Inked Map of Her Father’s Life

A coloured butterfly, a pseudo-celtic armband, a giant spiral: the tattoos on New Zealander Nell Frizzell’s father are an inky historical record of his lifetime’s journey through continents, relationships, families, marriages and deaths. Ahead of a return to New Zealand, having spent the past 28 years in Britian, Frizzell “meets her father anew” and “fills in the dots of his life story, to discover why he left the home to which I am now returning.”

“At 21, my father was getting ink etched into his ankle by an old man with a dirty needle wired up to a car battery in Goa …” Frizzell writes, then describing her father Bill’s years of travel on the hippy trail through Asia.

“… After 25 years away from his homeland, Bill went on a trip back to New Zealand. With me, my mum and sister in tow, he stopped over on Auckland’s Ponsonby Road to get a pseudo-Celtic armband tattooed by my cousin Otis. I watched and can still remember his grimace of discomfort as the needle tore into the soft, unmarked skin beside his armpit.

“His last, most recent tattoo is a huge semi-Aztec band across his calf that he gave himself as a 50th birthday present.

“My New Zealand passport renewed, my ticket booked, I am heading to my fatherland to cycle around a foreign country full of people who share my surname and strange nose. I am returning to where a grandmother I never knew waved goodbye to the boy who was to become the man, who was to become my father.”

Nell Frizzell is a freelance journalist. She has contributed to the Guardian’s music section, The Observer, Little White Lies, NME, and is the assistant editor at IdeasTap.com.