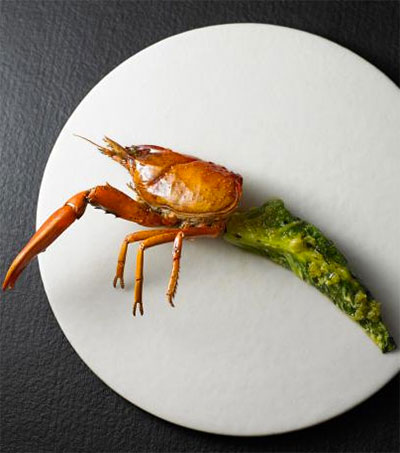 When Ben Shewry appeared on Chef’s Table – the Netflix series on the world’s greatest culinary stars – in 2015, the New Zealand-born chef-proprietor was on the crest of a wave, Corinna Hardgrave writes in a feature on Shewry for Britain’s The Sunday Times. It was the same year he became sole owner of Attica in Melbourne and, despite being a blow-in, was busying himself reinventing the cuisine of his adopted homeland, putting it back on the world map, Hardgrave continues.

Shewry is the first professional chef to put a focus on indigenous Australian ingredients. As we would say in Ireland, and as was arguably the case with artisan cheese here, “It took the foreigner …” He began dishing up green ants, wattleseeds, emu egg and red kangaroo, served with bunya bunya (ground berries) – this, he said to bemused Australian diners, is your country’s food.

Shewry was raised in Taranaki. With no television in the house until he was 10 years old, he spent his time swimming and surfing and exploring the coast. Fast forward to 2007, and Shewry had an epiphany when he tried a wild plant growing on the coastal plains near Melbourne.

“I could kind of tell that it [saltbush] wasn’t poisonous – I’ve been picking wild plants my entire life in New Zealand,” he tells The Times. “I have a way of eating things first. I’ll crush a little bit and see how it feels in my hand, and then I’ll put it under my tongue and let it sit there. If it reacts with my tongue, I’d probably spit it out. If it doesn’t, I’ll eat some, and then I’ll eat some the next day, until I find a botanist or somebody who can tell me what it is.”

“It was a bit of a slow burn, and lots of people would question the value of them and why I wanted to use them: ‘they don’t taste good’, ‘they’re a tourist gimmick’, ‘they come from the bush’, and other kinds of ways which really were just belittling the ingredients and indigenous people here. And so, through the ingredients, I began to discover an indigenous culture.

Shewry will visit Ireland on 21-22 October to speak at Galway’s Food on the Edge conference. This year’s theme is: Migration – Looking at How Food Travels and How that Affects People’s Perception of Food.