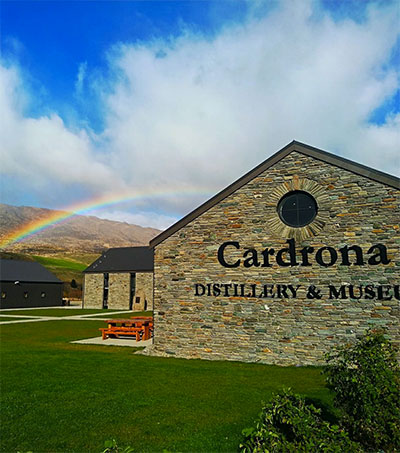 To the Bottom of the World for Single Malt Whisky

“It might seem strange that a country with such strong Scottish links should be relatively late to the whisky business,” Broom writes for Daily Beast. “After all, pretty much every country in the world where distilling is legal is making the stuff these days. New Zealand has only recently revived a tradition, which arrived with the first wave of Scottish immigrants in the 1830s – most of it then was moonshine.

“One of the centres for illicit distillation was the Cardrona Valley, where the hooch slaked the thirst of miners in the gold rush of the 1860s. At its height, more than 3000 souls lived along its 40km length. The valley’s glory days were short lived. As the gold finds dwindled the miners left. Even the houses were dismantled and transported to Wanaka. Today, the valley is home to less than 30 households. It does, however have a distillery, the Cardrona Distillery. A legal one at that, and is the brainchild of the remarkable Desiree Whitaker.

“In 2011, Whitaker was enjoying a course taught by Robert Birnecker, master distiller and CEO of craft Chicago distillery Koval, and visiting Scotland, ‘filling my brain and senses with every intricacy that is whisky.’

“Two years later she was living in Wanaka and had sold a dairy farm in order to follow her whisky making dream.

“‘The distillery wanted to be in Cardrona, and Cardrona wanted the distillery.’ There’s this thing about distilleries, I’d replied. ‘They take on their own life, make their own decisions about flavour.’ She’d nodded. “It’s where wine-making and distilling diverge substantially. The soul of a winery is found among the vines. A distillery’s soul is in its walls and equipment. The distillery itself determines character of the spirit that flows from it. Every quirk impacts upon the final character of the spirit. It puts its stamp on the people, rather than the other way around.’”